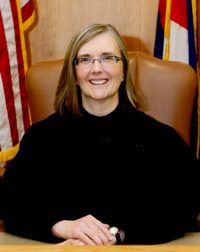 The Eighth Judicial District Commission on Judicial Performance unanimously agrees by a vote of 10-0 that the Honorable Julie Kunce Field MEETS PERFORMANCE STANDARDS.

Judge Field presides over domestic relations, civil, juvenile, and criminal (Wellness Court) matters in Larimer County, Colorado.  Judge Field founded and oversees Wellness Court, a specialized court program that seeks to reduce recidivism with persons with mental illness by supporting their long-term recovery rather than through imprisonment.  Judge Field’s demeanor is described as respectful, professional, and fair.  She speaks clearly and demonstrates patience with those who appear in her courtroom.  Her written and oral rulings are thoughtful and well-reasoned.  The Commission is impressed with Judge Field’s knowledge of the law as well as her ability to communicate the law.  The Commission believes she is a strong judge whose performance will continue to meet performance standards.

The Commission conducted a personal interview with Judge Field, reviewed opinions she authored, observed her in court, and reviewed judicial performance survey responses from attorneys and non-attorneys who appeared in Judge Field’s courtroom.  A total of fifty-eight individuals, fifty-two attorneys and six non-attorneys, believed they had sufficient knowledge to express their opinion of Judge Field.  When asked whether Judge Field meets performance standards: Of the attorneys responding to the survey, 94% answered yes; 4% answered no; and 2% had no opinion.  Of the non-attorneys responding to the survey, 83% answered yes and 17% answered no.  The small number of non-attorney responses makes this percentage difficult to consider as a reliable measure.  It should be noted that for the retention cycle in 2020, different methods for non-attorney survey distribution and collection were utilized statewide on a trial basis.  This transition may account for the low response rate from non-attorneys.  Judge Field received ratings above the statewide average among all district court judges standing for retention in the following areas: Case Management, Application and Knowledge of Law, Communications, Demeanor, and Diligence.  Eight appellate judges responded to surveys and rated Judge Field above the statewide average for District Court Judges standing for retention.

Judge Field was appointed to the District Court bench in 2011.  She received her undergraduate degree from the University of Nebraska and her law degree from the University of Chicago Law School.  Prior to her appointment, Judge Field worked as a mediator and a national trainer on family law, domestic violence, and litigation.  She was the founder and Executive Director of the Confidentiality Institute. She was a law professor and clinic director at The University of Michigan Law School, Washburn University School of Law, and The Sturm College of Law of University of Denver.  Prior to teaching, Judge Field practiced with Nutter, McClennen, & Fish, LLP, and served as a law clerk in Federal District Court.