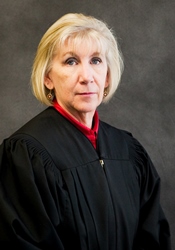 The Eighteenth Judicial District Commission on Judicial Performance unanimously agrees by a vote of 9-0, with one Commissioner absent from voting, that Judge Elizabeth Beebe Volz MEETS PERFORMANCE STANDARDS.

Judge Volz presides over civil matters in Arapahoe County, Colorado. Judge Volz's strengths include her demonstrated concern and compassion for both sides of the case, her judicial demeanor, and her work ethic.  As described by those that interact with her, she is fair and approachable, knowledgeable in the law, consistent, dependable, reasonable, and is professional at all times. Commission members observed these qualities in her during her personal interview and while observing her in court proceedings.  Judge Volz stays current in jurisprudence as the District Judges Association representative to the ABA, Chair of the Executive Council, Criminal Law Section of the CBA and a member of the Sonia Sotomayor Inn of Court.  She reads the journals,  newsletters of these organizations and others and takes advantage of CLE classes as often as possible. She participates in a "judges book club" which gives an opportunity to discuss legal issues with fellow jurists, both serving and retired.  She generally follows a standard format for legal writing which includes (1) clearly stating the issue to be addressed; (2) defining the legal principles to be applied and (3) stating a conclusion based on the facts as found by the court applied to the described legal principle. Based on these findings the Commission unanimously agreed that Judge Volz meets performance standards.

The Commission met with Chief Judge Michelle Ann Amico to discuss her interactions with Judge Volz, as well as with members of the District Attorney's Office, Public Defender's Office and the Probation Office, to discuss their impressions of Judge Volz's performance.  The Commission members also conducted a personal interview with Judge Volz, observed her during court proceedings, and reviewed judicial performance survey responses from attorneys and non­attomeys that interacted with her in her courtroom.  The surveys reflected personal opinions on Judge Volz's Case Management, Application and Knowledge of the Law, Communications, Diligence, Demeanor, and Fairness.  Of the eighty-six (86) completed surveys returned Judge Volz achieved an overall performance rating of 3.4 of a possible 4.0, compared to all County Judges at a rating of 3.4.  Her ratings for meeting performance standards from attorneys was 86%, and 100% from non-attorneys.

Judge Volz was appointed to the Bench January of 2011.  She earned her undergraduate degree from Hartwick College, Oneonta, N .Y. and her law degree from Albany Law School, Union University, Albany, N.Y. Prior to her appointment she was Senior Counsel, Campbell Killin Brittan & Ray, LLC. Judge Volz has been a member of the Rotary Club, prior to taking the bench and finds it as an invaluable way to stay connected to the community, the club engages in community service activities.  She also participated on the "Our Schools" program which she found to be as informative for her as she hoped it was for the students. She is an active member of her church participating in many activities.