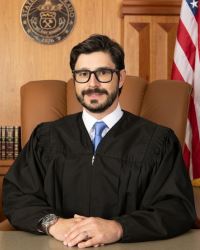 The Eighth Judicial District Commission on Judicial Performance finds by a vote of 6-4 that the Honorable Juan G. Villaseñor MEETS PERFORMANCE STANDARDS.

The Commission conducted several interviews with Judge Villaseñor, reviewed opinions he authored, observed him in court, and reviewed judicial performance survey responses from attorneys and non-attorneys who appeared in Judge Villaseñor’s courtroom.  A total of forty-nine attorneys and six non-attorneys believed they had sufficient knowledge to express their opinion of Judge Villaseñor.  When asked whether Judge Villaseñor meets performance standards: 68% of the attorneys answered yes; 29% answered no; and 2% had no opinion.  Of the six non-attorney survey-respondents, 63% answered yes; 13% answered no; and 25% had no opinion.  The small number of non-attorney responses makes this percentage difficult to consider as a reliable measure.  For the retention cycle in 2020, different methods for non-attorney survey distribution and collection were utilized, which may account for the low response rate from non-attorneys.  Judge Villaseñor received ratings below the statewide average of district court judges standing for retention in each area surveyed: Case Management, Application and Knowledge of Law, Communications, Demeanor, and Diligence.  Six appellate judges responded to surveys and rated Judge Villaseñor below the statewide average for District Court Judges standing for retention.

Judge Villaseñor was appointed to the District Court bench in 2018.  Judge Villaseñor received his undergraduate degree from St. John’s College in 1997 and his law degree from Vanderbilt University Law School in 2001.  Prior to his appointment, he served as an Assistant U.S. Attorney in the U.S. Attorney’s Office for the District of Colorado and as a public board member on the Colorado Medical Board.  Judge Villaseñor is engaged in several law-related community activities, like speaking to undergraduate business-school students at Colorado State University.