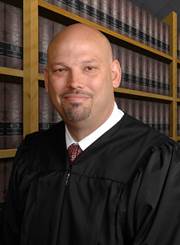 The Eighteenth Judicial District Commission on Judicial Performance unanimously agrees by a vote of 9-0, with one Commissioner absent from voting, that Judge Darren L. Vahle MEETS PERFORMANCE STANDARDS.

Judge Vahle currently presides over a 100% criminal docket.  Prior to his appointment to the District Court bench Judge Vahle served on the County Court bench.  The Commission has had the opportunity to evaluate Judge Vahle in both courts.  Judge Vahle has continuously received high marks in all categories assessed by the Commission including integrity, legal knowledge, communication, judicial temperament and administrative performance.  He is described as intelligent, efficient, knowledgeable of the law, hardworking, and respectful.  The surveys indicate Judge Vahle issues clear opinions quickly.  Several comments indicated Judge Vahle is overly concerned with the age of a case.  Judge Vahle assured the commission this is not the case and will grant the parties the time they need while assuring that cases continue to move forward. Other comments indicate a belief Judge Vahle favors the prosecution.  Judge Vahle expressed his concern over this perception and indicated because he was a prosecutor, he works hard in each case to make sure he does not give the appearance of bias. Based on all considerations, the Commission unanimously agreed that Judge Vahle meets performance standards.

The Commission conducted interviews with Public Defenders, District Attorneys, the Probation Department, the Chief Judge, and Judge Vahle himself.  They also reviewed opinions he authored, observed him in court, and examined judicial performance survey responses by attorneys and non-attorneys who interacted with the judge.  The commission received 42 responses including 31 attorneys and 11 non-attorneys.  Judge Vahle received an overall score of 3.5 on a scale of 4.0.  The average District Court Judicial score was 3.4.  Among the survey questions included was “based on your responses to the previous questions related to the performance evaluation criteria, do you think Judge Vahle meets judicial performance standards?”  Of the attorneys who responded to the survey, 86% answered yes.  Of the non-attorneys who responded, 100% answered yes.

Judge Vahle was raised in Arapahoe County and graduated from Arapahoe High School. He graduated cum laude from Westmont College with a Bachelor of Arts degree in psychology. He then worked for several years at a juvenile detention center, and at the Denver Children’s Home before enrolling in Law School at the University of Denver. He graduated in the top ten percent of his class and went to work for the District Attorney’s office in the 18th Judicial District. After 12 years in that office he was appointed to the county court bench in June of 2008.  He was appointed to the District Court Bench in 2018.  Judge Vahle facilitated a blood drive at the court, which was highly successful.  He also enjoys coaching volleyball at Arapahoe High School and plays the drums for his church.