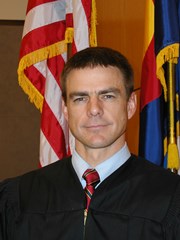 Judge Thompson is the Chief Judge of the Fifth Judicial District and presides primarily in Summit County. His district court docket is 35% civil cases, 33% criminal cases, 22% domestic relations cases, and 10% miscellaneous cases.  Based on the Commission’s overall evaluation, Judge Thompson has demonstrated he meets or exceeds performance standards in all categories.  He maintains a full docket in addition to his administrative duties as chief judge and manages his cases and courtroom diligently. He is thoughtful, thorough, and perceived as fair. Judge Thompson is self-aware and continually strives to learn about human dynamics as well as improving his already vast legal knowledge base to assist in his decisions.  He has embraced technological advances to facilitate justice serving community and budgetary needs.  He was at the forefront of judges across the state issuing orders during the initial COVID-19 crisis to keep the courts moving.  Judge Thompson clearly conveys expectations to attorneys and non-attorneys appearing before him.  He communicates well with thorough written orders and clear speech in his courtroom. Judge Thompson maintains an exceptionally low number of outstanding cases and moves cases through his court expeditiously.

In evaluating Judge Thompson, the Commission utilized survey results and comments from attorneys and non-attorneys, performance data, the Judge’s self- evaluation, sample court orders, courtroom observations of the Judge, input from the District Attorney and Public Defender, and an interview with the Judge.  In 2020 there were 23 attorneys and 5 non-attorneys surveyed and 100% reported that Judge Thompson met performance standards.  Well respected by those before him, Judge Thompson received a 4 out of 4 score for fairness from all those surveyed.  Judge Thompson produces well-reasoned rulings scoring 3.9 or above in application and knowledge of the law and communication. While still rated quite high in demeanor, he acknowledges that his tone may sometimes be misinterpreted and makes efforts to improve in that area.  There is mutual respect between him and those in his court.

Chief Judge Thompson is a Colorado native, graduated from Bates College with a degree in economics and received his JD from the University of Denver College of Law.  Following 18 years in private practice in Summit County, he was appointed to the District Court in 2010 and to the post of Chief Judge in 2013.  He was formerly a member the Summit County Countywide Planning Commission, the Town of Frisco Planning Commission, and the Summit County Housing Authority.  He remains involved in local charities and volunteer work.  Chief Judge Thompson enjoys spending time with his wife and children and participating in a variety of outdoor sports.