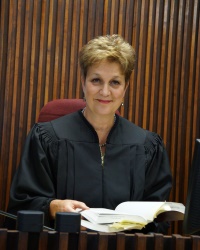 Judge Spahn’s serves as Presiding Judge of the Denver County Court, so she spends less time in a courtroom than other county court judges.  For that reason, she received less survey responses than other judges.  In the survey results from attorneys, compared to other county judges standing for retention Judge Spahn scored slightly higher than average in demeanor and fairness.  Judge Spahn scored slightly lower than average in application and knowledge of the law, case management, communications and diligence.  Together, all of the other Denver County Court judges recently nominated Judge Spahn for the County Court Judge of the Year award from the Colorado Judicial Institute.  The judges were “honored and excited to nominate … Presiding Judge Theresa Spahn” for the award.  Their “decision was unanimous” since “Judge Spahn is such an amazing and inspirational leader.”  Their nomination letter for the award listed many remarkable achievements—a list too long to include here.  For all of these reasons, the Commission unanimously finds that Judge Spahn meets performance standards.

The Mayor appointed Judge Spahn to the Denver County Court in October 2014.  Mayor Hancock named her as Presiding Judge in 2017.  Before her appointment, Judge Spahn was in private practice with Wedgle & Spahn, P.C.  She also previously served as the Director of the O’Connor Judicial Selection Initiative at the Institute for the Advancement of the American Legal System, the founding Executive Director of the Colorado Office of the Child’s Representative, an Adams County Court magistrate, and a deputy district attorney in Adams County.  Judge Spahn regularly volunteers in the community through the Denver County Court’s Judicial Oversight Group which brings judges of the Denver County Court together with students volunteering in the community.