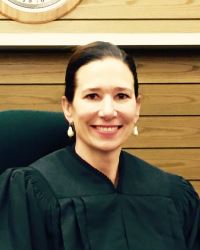 Judge Sokol presided over civil and domestic relations cases through December 2018 and over domestic relations and criminal cases from Jan 2019 to the present.  She is described as having an excellent courtroom demeanor and judicial temperament, and as being smart, patient, fair, calm, professional and extremely hardworking.  Judge Sokol exhibits an exceedingly high level of diligence and self-reflection, as well as excellent case management.  As a new judge, she is aware that she is on a learning curve and looks for ways to improve and goes above and beyond to learn areas of law that are new to her. In one case reviewed by the Commission, Judge Sokol astutely identified the most important legal issue even though it was not the one brought before her.  Judge Sokol’s overall combined performance score for all respondents on the 2020 Judicial Performance Survey was 3.6 out of 4.0, higher than the average score for all District Court Judges at 3.4.  Ninety-five percent of attorneys and 100% of non-attorneys also stated that Judge Sokol meets judicial performance standards.  Though Judge Sokol had one of the highest survey response rates for this cycle, the Commission notes only 45 respondents completed surveys with at least a single rating question answered, and only three of those were non-attorneys. However, the 2019 interim survey results were consistent with the 2020 results.

The Commission interviewed Judge Sokol, observed her in Court, reviewed her self-evaluation, written opinions, judicial performance data, comments from attorneys and non-attorneys, and the judicial performance survey results from 2019 and 2020.  It should be noted that a new methodology for the survey was used this year to which lower response rates may be attributed. This methodology affected all judges across the board and is not an explanation for individual results.  The Commission also spoke with representatives of the District Attorney’s Office and the Public Defender’s Office, both of whom reported positively on her performance and agreed that she “meets performance standards.”  The Commission is confident that Judge Sokol will be a long-term asset to the 4th Judicial District.

Judge Sokol was appointed to the District Court on August 1, 2017.  Judge Sokol graduated from the University of Michigan in 1996 and Georgetown University Law Center in 1999.  Prior to her appointment to the bench, Judge Sokol worked as an associate, partner and senior attorney in several private law firms.  Since taking the bench, she has volunteered as a judge for Teen Court and the college mock trial competition.  Judge Sokol has made professional presentations to several Bar Associations and actively participates in several professional law associations.