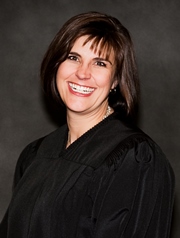 The Eighteenth Judicial District Commission on Judicial Performance unanimously agrees by a vote of 9-0, with one Commissioner absent from voting, that Judge Theresa Michelle Slade MEETS PERFORMANCE STANDARDS.

Integrity, legal knowledge, communication skills, and judicial temperament are strong areas for Judge Slade.  Judge Slade is currently assigned to a dedicated criminal docket but has presided over every case type during her past term.  She has good knowledge of the law for every docket type and is able to actively manage all docket types.  As the Presiding Judge in Douglas County she has additional administrative duties, including providing support for other judicial officers and staff, communicating with stakeholders, and managing day to day operations in the Douglas County Combined Courts.  She works well with and is of help to other officers in the 18th judicial.  Her peers speak highly of her organizational skills and her judicial demeanor.  During the Covid-19 restrictions Judge Slade has been especially resourceful in handling unusual situations.  Based on these findings the Commission unanimously agreed that Judge Slade meets performance standards.

The Judicial Performance Review Commission met with members of the District Attorney’s office, Public Defender’s Office, Probation Office, and the Chief Judge for feedback on Judge Slade’s performance.   A personal interview with Judge Slade was held with the Commission and Commission members observed her during court proceedings and the Commission reviewed judicial performance survey responses from attorneys and non-attorneys.  The surveys reflected personal opinions on Judge Slade’s Case Management, Application and Knowledge of the Law, Communications, Diligence, Demeanor and Fairness.  The few surveys received for Judge Slade consistently reflect higher than average performance with a perfect 4.0 Fairness rating and an overall performance rating of 3.5 out of a possible 4.0, compared to all District Judges at a rating of 3.4.  Comments received regarding Judge Slade were all positive with Eighty-nine percent of responding attorneys and 100% of non-attorneys responding stated Judge Slade meets performance standards.

Prior to service in court, Judge Theresa Slade was the owner of Slade and Associates.  She served as a Deputy District Attorney, Alternate Defense Counsel, court appointed Respondent Parent Counsel, Guardian ad Litem, and as a municipal and magistrate judge, all in the 18th Judicial District.  She was appointed as a District Judge in August, 2012 and was retained by voters in 2014.  During her term, the Chief Justice of the Colorado Supreme Court appointed Judge Slade to serve on the Alternate Dispute Resolution Rules Committee, and most recently to the Juvenile Rules Committee.  She regularly volunteers to present legal education to practicing lawyers, law students, and community members.  She also coaches teams for the high school mock trial program, presents at middle and high schools statewide for Constitution Day, and serves on local educational and school safety committees.  She earned her Bachelor’s Degree from Colorado State University and her JD from the Sturm College of Law at the University of Denver.