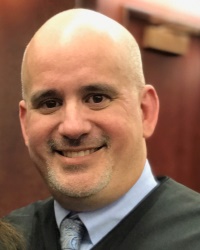 The Eighteenth Judicial District Commission on Judicial Performance unanimously agrees by a vote of 9-0, with one Commissioner absent from voting, that Judge John E. Scipione MEETS PERFORMANCE STANDARDS.

Judge Scipione presides over criminal (70%), domestic relations (20%) and probate (10%) matters in Arapahoe County, Colorado.  Judge Scipione’s strengths include his fairness, strong work ethic, strong docket management, and that he treats parties with dignity and respect.  He also takes the time to ensure that he understands the issues being presented, including being prepared and researching when necessary.  He is described as making good prompt rulings based on the evidence and arguments presented.  While he is generally described as having a positive temperament and being patient, some expressed that Judge Scipione can appear to be frustrated or quick-tempered.  Judge Scipione is aware of this concern and is taking action to remedy this perception.  The Commission does not perceive his demeanor as an issue.  Based on these findings the Commission unanimously agreed that Judge Scipione meets performance standards.

The Commission conducted a personal interview with Judge Scipione, reviewed opinions he authored, observed him in court, reviewed judicial performance survey responses from attorneys and non-attorneys, and interviewed the District Attorneys, Probation, Public Defenders and the Chief Judge.  The surveys reflected personal opinions on Judge Scipione’s Case Management, Application and Knowledge of the Law, Communications, Diligence, Demeanor, and Fairness.  Of the twenty-eight (28) completed surveys returned Judge Scipione achieved an overall performance rating of 3.4 of a possible 4.0, compared to all District Judges at a rating of 3.4.  The Commission notes that Judge Scipione’s fairness and case management scores exceed the average of all District Court Judges and he scored 4.0 on several of the factors to be considered.  His ratings for meeting performance standards from the twenty-seven attorneys who responded was 88%, and 100% from the one non-attorney who responded.

John E. Scipione obtained his undergraduate degree from the State University of New York at Binghamton and his law degree from the University of Colorado.  He was in private practice from 1995 until 2012, when he became a District Court Magistrate.  He served in that role until 2017, when he was appointed to the Arapahoe County Court bench.  He was appointed to the District Court bench for the 18th Judicial District in September 2018.  In his free time, he volunteers for high school mock trial, gives presentations at local schools, participates in bar association activities and volunteers for committee assignments inside and outside of the 18th Judicial District.