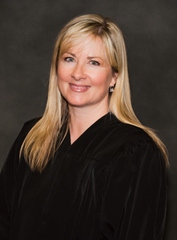 The Eighteenth Judicial District Commission on Judicial Performance unanimously agrees by a vote of 9-0, with one Commissioner absent from voting, that Judge Anne M. Ollada MEETS PERFORMANCE STANDARDS.

Judge Ollada previously managed the busiest docket, Division 302, at the Arapahoe County courthouse covering all first appearances in criminal cases.  In January of this year, she transferred to a 90% civil and 10% small claims docket at the Littleton courthouse to assist the county in a new assignment.  Individuals describe Judge Ollada as a knowledgeable, organized, respectful, companionate, and patient Judge, who treats each individual with equal dignity. She was praised for her awareness of mental health concerns. She was also praised for her efficient case management.  Based on these findings the Commission unanimously agreed that Judge Ollada meets performance standards.

The Commission conducted interviews with Public Defenders, District Attorneys, the Probation Department, the Chief Judge, and Judge Ollada herself. Additionally, commissioners reviewed orders authored by the Judge, observed her in court, and examined judicial performance survey responses by attorneys and non-attorneys who interacted with Judge Ollada.  The surveys reflected personal opinions on Judge Ollada’s Case Management, Application and Knowledge of the Law, Communications, Diligence, Demeanor, and Fairness.  Of the fifty-three (53) completed surveys returned, Judge Ollada achieved an overall performance rating of 3.2 out of 4.0; the average rating for all county court judges was 3.4.  Notably, on the individual category scores, Judge Ollada scored 4.0 on fairness, the highest score achievable.  When those surveyed were asked if they believed Judge Ollada meets judicial performance standards, 77% of attorneys and 100% of non-attorneys responded “yes.”  A total of 35 attorneys and 18 non-attorneys responded.

Judge Ollada obtained her undergraduate degree in 1992 from the University of California at Santa Barbara where majored in Chinese studies.  She completed her juris doctorate degree at the California Western School of Law in San Diego, then practiced as a civil attorney.  Judge Ollada was appointed as a magistrate in 1999 and served until she was appointed to the Arapahoe County Court bench in September 2006.  In service to her community, Judge Ollada is a long-term and regular speaker for Arapahoe High School’s law class and presides over their mock trials twice a year.  At the Colorado Institute for Faculty Excellence, Judge Ollada created a presentation about living life to its fullest every day and is involved in numerous committees to further the education of judges statewide.