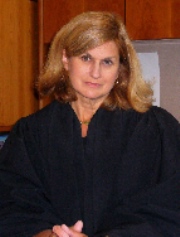 Judge Oeffler presides over criminal, civil, and domestic relations cases.  Participants in Judge Oeffler’s courtroom described her demeanor as being respectful, professional, and fair.  She is consistently prepared and efficiently manages cases.  Judge Oeffler received consistently positive reviews in surveys of attorneys and non-attorneys.  Jurors complimented her for her fairness and impartiality, her ability to effectively communicate with attorneys and non-attorneys, as well as her ability to control the courtroom, putting jurors and witnesses at ease. Judge Oeffler also received praise as being a dedicated and effective judge.  Her rulings are clear, concise, and well delivered.  Judge Oeffler is an extremely hard worker.  During a portion of her current term, she took on probate matters in addition to her other assignments and significantly reduced the backlog of probate cases by leading the conversion of probate matters to electronic filing and implementing other efficiency protocols.  In criminal matters, Judge Oeffler could more clearly explain her application of the Colorado Rules of Evidence and the background knowledge she uses in making rulings.  Overall, based on the comments received and reviewed by this Commission, Judge Oeffler is one of Jefferson County’s highest-performing judges.

Judge Oeffler was appointed to the First Judicial District Court in December 2005.  Before her appointment, Judge Oeffler served as Assistant County Attorney in Jefferson County.  She received her undergraduate degree from Muhlenberg College and her law degree from Dickinson School of Law.  Judge Oeffler has served as the co-chair of the First Judicial District Bench and Bar Committee and is a member of the Access to Justice Committee.  She volunteers as a judge for the Colorado High School Mock Trial competition.