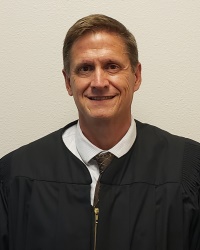 Judge Norvell presides primarily over domestic and criminal cases, but his current workload includes civil, juvenile, mental health, and probate matters in his court.  Judge Norvell maintains control of the courtroom and gives the proceedings a sense of dignity, while still treating attorneys and litigants with a great deal of compassion and humanity.  Remarkably, as in past years, representatives from both the Public Defender’s Office (PD) and the District Attorney’s Office (DA) both mentioned that Judge Norvell was not biased for the prosecution or defense.  They also agreed, independently, that Judge Norvell was very well prepared.  No other Judge received such consistent comments from the PD and the DA. Comments from the Judicial Performance Survey describe Judge Norvell as an individual who is “extremely conscientious,” “kind and respectful,” “well prepared”, and “[someone who] makes me want to be a better person.”  Of the issues identified by parties who completed the survey, the majority appear to be related to Judge Norvell’s limited time on the bench (he was appointed in 2017).  In his self-evaluation Judge Norvell indicated that he is committed to developing greater knowledge of areas of law in which he did not practice as an attorney.  The Commission was impressed with Judge Norvell’s approach to the law, his desire to improve, and his commitment to treating all courtroom participants with respect.  For these reasons, the Commission voted unanimously that Judge Norvell meets the performance standard.

The Commission reviewed comments from the public and analyzed survey responses from attorneys and non-attorneys who had appeared in his court.  The Commission observed him in court, reviewed decisions he authored, reviewed his self-evaluation, met (separately) with representatives from the Public Defender’s and District Attorney’s Offices, and conducted a personal interview with Judge Norvell.  Among the survey questions was “does Judge Norvell meet the performance standards?”  Of attorneys completing the survey, 87% indicated he meets performance standards while 9% indicated he does not meet performance standards.  Judge Norvell received an overall combined average rating in the survey results (3.3 out of 4.0) that was slightly below the average combined rating of all District Court Judges across the state (3.4 out of 4.0).

Judge Norvell was appointed to the District Court bench for the 6th Judicial District in 2017.  Prior to his appointment Judge Norvell served as an Assistant United States Attorney in the District of Colorado from 2007 to 2017.  Judge Norvell received his undergraduate degree from Texas Tech University and his Juris Doctorate from Southern Methodist University.  His experience prior to becoming a judge was primarily criminal law, as a state and federal prosecutor.  As judge he has worked diligently to educate himself about the civil rules, probate rules, relevant statutes, and case law relevant to the cases before him.