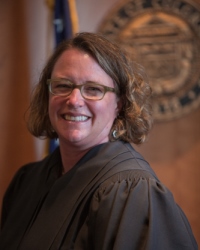 Judge Moore presides in Jefferson County Court over misdemeanor, traffic, criminal, civil, juvenile, and small claims cases.  Her demeanor is described as professional and compassionate.  Judge Moore has stated that she strives to ensure fair and equal treatment for all who appear in her courtroom.  She brings a sense of calmness to an otherwise difficult setting by intentionally exuding a calm and respectful attitude towards all parties and participants.  Judge Moore was noted as providing rulings which are clear, concise, and well written.  She also makes a special effort to ensure that her orders are understandable to the parties in each case.  She is known as a judge who makes herself available to assist in other courtrooms while still managing her docket.  In 2020 her colleagues selected her to be the 2021 presiding County Court judge.  Judge Moore is a collaborator who meets regularly with Public Defenders, the District Attorneys, her staff, and other court personnel to ensure that her courtroom is run effectively and efficiently.  Attorneys and non-attorneys described her as knowledgeable, impartial, and patient.  Judge Moore’s opinions reflect her knowledge of the law and her common-sense, yet kind, communication style.

Judge Moore was appointed to the First Judicial District County Court in 2008. Before her appointment to the court, Judge Moore was a District Court Magistrate for the First Judicial District and a public defender.  Her BA is from the University of Colorado and she received her law degree from Vermont Law School.  Judge Moore believes in giving back to her community as evidenced by her community service work: Chair of the First Judicial District High School Mock Trial Tournament; Chair of the Court Services Advisory Board; the Colorado Faculty Excellence in Judicial Education; the Statewide Behavioral Transformation Counsel and Task Force Concerning the Treatment of Persons with Mental Illness in the Criminal and Juvenile System; the Executive Board of the Criminal Law Section of the Colorado Bar Association, and the Colorado Crisis Services Advisory Council.