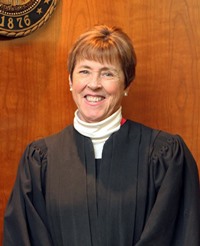 Judge Meinster almost exclusively handles juvenile cases, while outside of that are domestic relation cases.  Her other major duty is supervising seven magistrates.  Judge Meinster also works closely with the Department of Human Services regarding cases in which families face crises with addiction, dependency and neglect, custody, the foster care system, and delinquency.  Judge Meinster faces self-represented parties on a more frequent basis; almost all others have court-appointed attorneys.  Judge Meinster views her court as a problem-solving court and works collaboratively with all parties to resolve each case.  Foremost, she works to protect children in the legal process, basing decisions on their best interest.  She presides with an appropriate informality to make her courtroom environment seem more comfortable for the parents and children appearing before her.  She has children’s art on her walls and has candy available.  In her interview with the Commission and in observing her, she clearly demonstrated a genuine passion for the welfare of youth and families.  In her evaluation, she was characterized as down to earth, someone who empathizes with all people.

The performance evaluation on Judge Meinster is based on many kinds of evidence, including a personal interview, courtroom observations, opinions she authored, comments received from interested parties, and survey responses.  Regarding whether she met judicial performance standards from the survey, 88 percent of attorneys practicing before her said yes, 8 percent said no, and 4 percent had no opinion.  By attorneys, her overall survey score of 3.0 was slightly under the average overall score for district judge at 3.4 on a 4.0 scale.  Judge Meinster was rated by appellate judges slightly above other district court judges on overall performance.

Judge Meinster was appointed to the bench in October 2011.  Previously, she had served as a district magistrate.  Since her appointment, she has specialized in juvenile justice issues.  She has been in juvenile law for about thirty years; it is her life work.  She is a graduate of Mt. Holyoke College and received her law degree from the University of San Diego.  Judge Meinster has been recognized with five awards for outstanding service. Judge Meinster’s community service includes: Executive Committee of the Court Improvement Program; Juvenile Rules Committee; within the First Judicial District, Chair of the Juvenile Services Planning Committee; the Best Practice Team, and the 1st Judicial Management Team.  In addition, Judge Meinster regularly speaks at state and national professional forums.  Judge Meinster was the first Colorado judge to receive the Child Welfare Law Specialist certification from the National Association of Counsel for Children and the American Bar Association.  Her family treatment court was a 2020 nominee for the national Juvenile and Family Treatment Court Leadership Award.