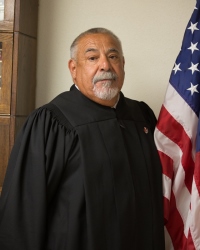 The Sixteenth Judicial District Judicial Performance Commission finds by a split vote (5-4) that Judge Richard Medina MEETS PERFORMANCE STANDARDS but does need to continue to improve his performance to become a more effective judge.

In reaching this decision, the Commission reviewed Courtroom observations, in-person interviews with the District Attorney and the Public Defender of the 16th Judicial District.  The Commission also interviewed Judge Medina.  Unfortunately, there were not enough responses through surveys sent to the public for the Commission to review.  Judge Medina participated in an interim evaluation one year ago. Judge Medina was given a lot of feedback.  At that time, the Commission identified numerous areas that Judge Medina needed to improve on, including his legal knowledge and consistent application of court rules and procedures.  Through feedback over this past year, Judge Medina has been slow to incorporate the feedback and as a result, the areas in which he needed improving, he did not improve nearly as much as the Commission had hoped.

Judge Medina received his bachelor’s degree from the University of Colorado, Colorado Springs.  Before becoming a Judge in Crowley County, he worked at the Crowley County Land Use Administrator and Building Inspector.  Judge Medina was also a Kiowa County GED instructor.  Judge Medina has also served as a Park Ranger for the National Park Service and as a Case Manager for Colorado Department of Corrections.