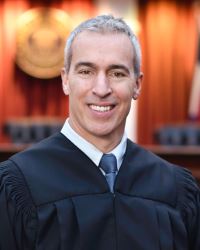 The Twentieth Judicial District Commission on Judicial Performance unanimously agrees by a vote of 9-0 with one recusal that Judge Jonathon P. Martin MEETS PERFORMANCE STANDARDS.

Judge Martin presides over criminal, traffic, civil, misdemeanor and small claims matters in Boulder County, Colorado.  Judge Martin is an excellent communicator, professional, fair, compassionate, and knowledgeable of the law.  Surveys of those who have appeared in his courtroom indicate Judge Martin runs a very organized courtroom with dignity and firmness.  He is clear and concise when speaking, polite, competent, and personable.  Judge Martin reports he uses his life and legal experiences to ensure equal treatment and access for all persons in his courtroom.  Judge Martin takes pride in diving into the current state of the law and conducting research that helps him remain current in both substantive and procedural law.  His decisions are organized, precise, and clear, with specific conclusions.

The Performance Commission interviewed Judge Martin, observed him in court or listened to recordings of his court proceedings, read opinions he has written, solicited and received comments from the Boulder District Attorney and the co-chairs of the Boulder Criminal Defense Bar, and reviewed performance survey responses from attorneys and non-attorneys who had been in Judge Martin’s courtroom.  Among the survey questions was “based on your responses to the previous questions related to the performance evaluation criteria, do you believe Judge Martin meets judicial performance standards?” Of the 36 attorneys responding to the survey, 81 percent answered yes, 16 percent answered no, and three percent had no opinion.  Of the 5 non-attorneys responding to the survey, 100 percent answered yes.  Overall, Judge Martin demonstrates strong knowledge of the law, respect for the judicial process, and compassion for all participants.

Judge Martin was appointed to the Boulder County Court bench in September 2016.  Before taking the bench, he served as a Deputy District Attorney in the Twentieth Judicial District.  Prior to that, he was in private practice in Denver at Holland & Hart and Snell & Wilmer specializing in intellectual property law. Judge Martin is a graduate of the University of Colorado Law School and a distinguished graduate in engineering from the United States Air Force Academy.  Judge Martin served ten years as an active duty Air Force officer and pilot.  Judge Martin volunteers for various mock trial teams, at the local youth homeless shelter, and teaches newly appointed judicial officers at New Judge Orientation training.