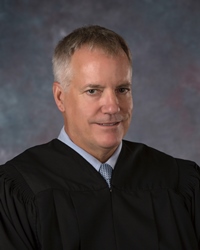 During his current term in office, Judge Macdonald has presided over civil, criminal, family law, juvenile, and mental health matters in Boulder County, Colorado.  He gets high ratings for his demeanor, which is described by attorneys and non-attorneys as fair, pleasant, impartial, dignified, and patient.  He is respectful to court participants, is prompt in communicating his decisions, and writes clearly.  As his experience in a variety of cases has expanded over the past term, so have his ratings on knowledge of the law.  He participates in community service by volunteering in the Boulder County Sheriff’s Office Citizen’s Academy and providing information to the public about the court system and the judicial district.

The Performance Commission interviewed Judge Macdonald, observed him in court or listened to recordings of his court proceedings, read opinions he has written, solicited and received comments from the Boulder District Attorney and the co-chairs of the Boulder Criminal Defense Bar, and reviewed performance survey responses from attorneys and non-attorneys who had been in Judge Macdonald’s courtroom.  Among the survey questions was “based on your responses to the previous questions related to the performance evaluation criteria, do you think Judge Macdonald meets judicial performance standards?”  Of the 35 attorneys responding to the survey, 82 percent answered yes, nine percent answered no, and nine percent had no opinion.  Of the nine non-attorneys responding to the survey, 90 percent answered yes and 10 percent no.  Overall, Judge Macdonald is a dedicated, sensible judge who is oriented to helping those who appear in his courtroom.

Judge Macdonald was appointed to the bench in May 2011.  Prior to his appointment, he was an assistant county attorney with the Boulder County Attorney’s Office specializing in litigation matters involving the Sheriff, Coroner, District Attorney and the Board of County Commissioners.  Before joining the County Attorney’s Office in 1990, he worked at Sawaya & Rose in Denver (1989-1990), the Public Defender’s Office in Clearwater, Florida (1986-1989), and Hanley & Deane in St. Petersburg, Florida (1985-1986).  Judge Macdonald is a graduate of Stetson University College of Law and the University of Colorado.