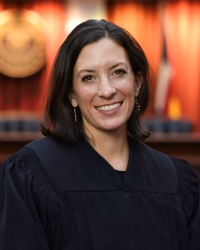 Judge Loew has presided over a criminal docket since July of 2019.  She previously she presided over a juvenile docket for two years.  The Commission conducted a personal interview with Judge Loew and observed her in court via WebEx.  Comments from those who have appeared in proceedings in Judge Loew’s courtroom describe her demeanor is described as knowledgeable, respectful, professional, dignified, and fair.   Commission members observed these qualities during their evaluation and interview.

Commission members also reviewed opinions Judge Loew has authored, and reviewed survey responses from attorneys and non-attorneys who had appeared in Judge Loew’s court. Among the survey questions was “Based on your responses to the previous questions related to the performance evaluation criteria, do you think Judge Loew meets judicial performance standards?”  Of the attorneys responding to the survey, 77% answered yes.  The surveys also give her high scores for giving proceedings a sense of dignity and for having a sense of compassion and understanding for those appearing before her.  Her written decisions are clear, concise, and well-written.  Comments from those familiar with Judge Loew note she is well-prepared and manages her docket and courtroom well.

Judge Loew graduated from Colorado State University in 2003 with a Bachelor of Arts in History and received her Juris Doctorate from the University of Denver Sturm College of Law in 2006.  She was admitted to the Colorado Bar the same year.  She served as a deputy District Attorney from 2008 through 2016 in the Denver District Attorney’s Office where she worked in county, juvenile, drug, and district courts.  She was serving as a district court magistrate in the 17th Judicial District until 2017 when she was appointed to the District Court bench.