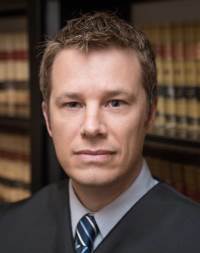 The Eighth Judicial District Commission on Judicial Performance unanimously agrees by a vote of 10-0 that the Honorable Joshua B. Lehman MEETS PERFORMANCE STANDARDS.

Judge Lehman presides over criminal, traffic, and civil matters.  The Commission finds Judge Lehman to be thorough, respectful, and self-aware.  He makes court proceedings accessible to self-represented parties, is patient, and ensures those who appear in front of him are heard.  Judge Lehman comes to court prepared and knowledgeable about the law.  His written orders are well-researched and well-written.  Judge Lehman has built processes to ensure that he runs an efficient courtroom, reviews and issues orders on written pleadings outside of the courtroom, while maintaining flexibility to handle emergency matters.  Judge Lehman’s judicial philosophy balances protecting an individual’s rights with allowing the victim to be heard and protecting community safety.  The Commission believes he is a strong judge, who continues to sharpen his skills by reflecting on his performance and process with an eye toward improvement.

The Commission conducted a personal interview with Judge Lehman, reviewed opinions he authored, observed him in court, and reviewed judicial performance survey responses from attorneys and non-attorneys who appeared in Judge Lehman’s courtroom.  A total of thirty-eight individuals, thirty-six attorneys and two non-attorneys, believed they had sufficient knowledge to express their opinion of Judge Lehman.  When asked whether Judge Lehman meets performance standards: Of the attorneys responding to the survey, 94% answered yes; 3% answered no; and 3% had no opinion.  Of the non-attorneys responding to the survey, 100% answered yes.  The small number of non-attorney responses makes this percentage difficult to consider as a reliable measure.  It should be noted that for the retention cycle in 2020, different methods for non-attorney survey distribution and collection were utilized statewide on a trial basis.  This transition may account for the low response rate from non-attorneys.  Judge Lehman received ratings above the statewide average among all county court judges standing for retention in all areas surveyed: Case Management, Application and Knowledge of Law, Communications, Demeanor, and Diligence.

Joshua B. Lehman was appointed to the County Court bench in 2014.  Judge Lehman received his undergraduate degree in Administration of Justice from the University of Wyoming in 1998 and his law degree from the Wyoming College of Law in 2001.  Prior to his appointment, Judge Lehman served as a deputy district attorney in Fort Collins for nearly ten years.  Before working as a deputy district attorney, Judge Lehman represented federal employees in appeals of adverse employment actions and discrimination claims.