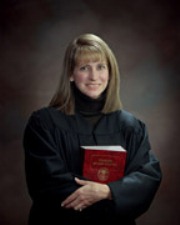 In its 2019 Interim Judicial Review, the Commission identified no problems with Judge Larson’s performance.  At that time, she had only been on the district court bench for a little more than two years.  The Commission noted her inclination toward self-introspection and her ability to learn from past mistakes.  During Judge Larson’s 2020 interview with the Commission, the members were impressed by her humility and her ability to acknowledge areas for improvement in her own performance, even in areas where she surpassed other District Judges throughout the state.  The Commission found her to be a Judge who conscientiously strives for excellence in both her personal comportment and in the manner in which she runs her courtroom.  Judge Larson continues to perform proficiently, if not superbly, in all areas of judicial performance.

The current Judicial Performance Survey Report reveals that Judge Larson scored higher  than  average when compared to all district judges within the State in each of the six areas of judicial performance:  case management; application and knowledge of law; communications; diligence; demeanor; and fairness.  Her higher survey scores were reflected in the responses of both attorneys and non-attorneys.  Moreover, the survey scores did not reveal any areas where improvement was needed.  The written comments provided by the survey respondents were largely complimentary, and typically referenced Judge Larson as respectful, professional, and fair.   These comments also included several references to her calm demeanor and the compassionate impartiality with which she runs her courtroom.  For this evaluation, in addition to interviewing Judge Larson and reviewing survey responses from attorneys and non-attorneys who have appeared in her courtroom, the Commission examined a sample of her written opinions and orders, and interviewed representatives of both the local District Attorney’s Office and the local Public Defender’s Office.   Due to the COVID 19 pandemic, Commission members were unable to observe her in Court.

Judge Larson was appointed to the District Court bench in Mesa County on January 1, 2017.  She previously served for approximately 10 years as a County Court Judge in Mesa County.  Judge Larson presently describes her workload as follows:  57% criminal; 15% Domestic Relations; 15% Civil; 5% Juvenile; 5% Misdemeanor; 1% probate; 1% mental health; and 1% traffic. The Commission views Judge Larson as an asset to the 21st Judicial District.