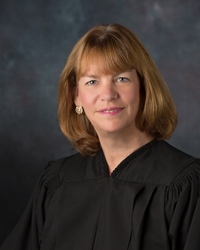 During her current term, Judge LaBuda has presided over criminal, civil, family law, probate, and mental health matters in Boulder County, Colorado.  Judge LaBuda is detail oriented, especially in complex matters, and she comes to court prepared.  Her written decisions are clear, concise and well-written and reflect her knowledge of the law and straightforward communication style.  In response to some attorney’s complaints that she is sometimes short with litigants and juries because of her desire to manage an efficient courtroom and move cases along, she has improved, and strives to further improve, her judicial demeanor.  She attends seminars and trainings offered to help ensure equal treatment to all defendants in criminal cases.  In her recent criminal docket rotation Judge LaBuda has presided over a number of high-profile cases.  She participates in community service by serving on the Boulder Bar Association Board of Directors, participating on the board of Charities Within Reach, a non-profit organization that supports an orphanage she founded in Thailand, and teaching about government in local schools.

The Performance Commission interviewed Judge LaBuda, observed her in court or listened to recordings of her court proceedings, read opinions she has written, solicited and received comments from the Boulder District Attorney and the co-chairs of the Boulder Criminal Defense Bar, and reviewed performance survey responses from attorneys and non-attorneys who had been in Judge LaBuda’s courtroom.  Among the survey questions was “based on your responses to the previous questions related to the performance evaluation criteria, do you think Judge LaBuda meets judicial performance standards?” Of the 32 attorneys responding to the survey, 72 percent answered yes, 25 percent answered no; and three percent had no opinion.  Of the 56 non-attorneys responding to the survey, 97 percent answered yes, and three percent had no opinion.  Overall, Judge LaBuda is a hardworking, compassionate judge who loves the law and constantly works to improve.

Judge LaBuda was appointed to the Boulder District Court in May 2012.  Prior to her appointment she was a Senior Assistant Attorney General, representing the State Personnel Board and the Division and Commissioner of Insurance.  Judge LaBuda was a trial attorney in private practice from 1992 to 2009, where she practiced both in state and federal court.  Her practice focused on family law, employment law and disability law.  Judge LaBuda earned her law degree from the University of Colorado in 1992, where she graduated Order of the Coif.  She received a master’s degree in behavioral disabilities/rehabilitation counseling psychology from the University of Wisconsin- Madison in 1981 and a bachelor’s degree in Rehabilitation Education in 1980.  She practiced in the field of rehabilitation counseling for 10 years prior to receiving her law degree.