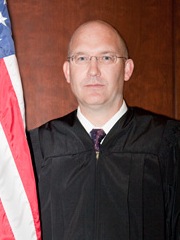 Judge Kirby was appointed to the County Court bench in July 2009. His current docket consists of 50% Civil, 25% Criminal and 20% Misdemeanor.  The Commission was pleased to see Judge Kirby continues to excel as a Judge.  Throughout his evaluation words that often came up to describe Judge Kirby were, compassionate, thoughtful, fair, professional and consistent.  It was often said he treats everyone in his courtroom with dignity and respect.  Overall Judge Kirby’s evaluation indicated that he is an excellent Judge.  The commission is pleased to report that Judge Kirby is meeting all the commission’s performance standards.

In evaluating Judge Kirby the Commission reviewed opinions he authored, observed him in court, read court transcripts, conducted a personal interview via video link, reviewed comments received from interested persons, and reviewed survey responses from attorneys who have had experience in his court. In reviewing the performance standards criteria: integrity, legal knowledge, communication skills, judicial temperament, administrative performance, and service to the legal profession and the public, the Commission found that Judge Kirby's scores were above average compared to other County Court Judges. Of 21 attorneys’ responding to the survey 89% answered that Judge Kirby met performance standards, 11% responded that he did not meet performance standards.

Judge Kirby graduated from Regis University in Denver with a Bachelor of Arts Degree in Political Science.  He then became a Naval Officer graduating from Officer Candidate School and continued active duty until 1992 and continued in the Navy Reserves as a Commander until he retired after 25 years of service.  Judge Kirby graduated from University of Denver School of Law and was licensed in 1995. Judge Kirby was Deputy Public Defender for the State of Colorado until his appointment as magistrate in 2007 and then went on to be appointed to the Adams County court bench in 2009. He also created the first state accredited Drug Court in Adams County.