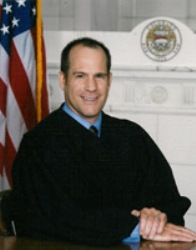 Judge Kerns presides over criminal matters in Greeley, Weld County, Colorado, but he has previously presided over civil and probate matters.  In his present role, Judge Kerns also presides over Adult Treatment Court, a rehabilitation focused court dealing primarily with criminal defendants with substance abuse issues.  Judge Kerns has been described as being fair, neutral, respectful, prepared, and diligent.  Judge Kerns is well-prepared, and it is evident how seriously he takes his obligations and how hard he tries to make the right decision in every case.  Judge Kerns understands the importance of setting an appropriate demeanor in his courtroom – one of neutrality and respect for all persons present.  Individuals who have appeared before Judge Kerns noted his respectful demeanor.  Judge Kerns maintains appropriate control of his docket, prioritizing moving cases efficiently, while understanding extraordinary circumstances on a case-by-case basis.  Judge Kerns’ written decisions are well-written and well-reasoned, such that even the losing party in cases before him commented that they have understood how Judge Kerns reached his conclusion, from a legal and factual standpoint.

Commission members observed these qualities during their evaluations and WebEx interview (due to COVID-19) with Judge Kerns.  The commission observed Judge Kerns to be very professional and genuine and saw how Judge Kerns conducted his courtroom with courtesy and kept appropriate control.  The Commission also read Judge Kerns’ written rulings, along with judicial performance survey responses from attorneys and non-attorneys who had courtroom interactions with Judge Kerns.  Notably, 95% of attorneys and 100% of non-attorneys (a total of two responses) indicated Judge Kerns is meeting performance standards.  Based on all findings, the Commission unanimously agreed that Judge Timothy Kerns MEETS PERFORMANCE STANDARDS.

Judge Timothy Kerns was appointed District Court Judge on January 1, 2011.  Previously he served as a County Court Judge from October 2007 through December 2010.  Prior to appointment to the bench, Judge Kerns was a partner in a law firm, with an emphasis in family law, dependency and neglect through appointments as a guardian ad litem and parent’s counsel, civil law, and mediation.  Judge Kerns has undergraduate degrees in history, political science, and French from Central Methodist College in Fayette, Missouri.  Judge Kerns obtained his law degree from the University of Missouri – Kansas City.  Judge Kerns has participated as a judge for the Colorado Bar Association Mock Trial program and serves as a reviewer for treatment courts in other jurisdictions and a mentor for other treatment court judicial officers.