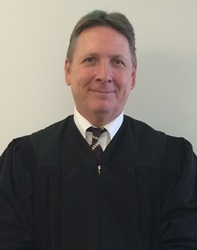 The Second Judicial District Commission on Judicial Performance, on a vote of 10-0, unanimously finds that the Honorable A. Bruce Jones MEETS PERFORMANCE STANDARDS.

The Commission conducted a personal interview with Judge Jones, reviewed orders he authored, observed him in court through online proceedings and by listening to recordings, and reviewed survey responses from attorneys and non-attorneys who had experience with Judge Jones.

Those surveyed were asked, “based on your responses to the previous questions related to the performance evaluation criteria, do you think Judge Jones meets judicial performance standards?”  Of the 28 attorneys responding to the surveys, 77% believe that Judge Jones meets performance standards and 23% believe he does not meet performance standards.  Of the 9 non-attorneys who answered the survey, 100% believe he meets performance standards.  Judge Jones received a perfect score for fairness and an average rating for communications when compared to all district court judges standing for retention this year.  When compared to that same pool of judges, he received survey ratings slightly below the statewide average in these areas: case management; application and knowledge of law, diligence, and demeanor.  His overall ratings by appellate judges was slightly above the average rating of all district court judges standing for retention.  Some survey respondents commented about Judge Jones’s demeanor; Judge Jones explained steps he has taken to address those concerns and his interest in working to improve in that area.  Overall, the Commission was impressed with Judge Jones’s performance.

The Governor appointed Judge Jones to the District Court in 2011.  Before his appointment, he was in private practice, specializing in civil litigation and appeals.  Judge Jones received his bachelor’s degree from Texas A&M University and a Juris Doctor from the University of Texas School of Law.  Judge Jones recently completed 12 years of service on the Board of Colorado Public Television.  He also served on the planning committee to celebrate the 50th year of Southeast Denver Baseball and Softball and he was inducted into that organization’s first Hall of Fame.  He has taught at the University of Denver Sturm College of Law and he currently teaches at the University of Colorado School of Law.