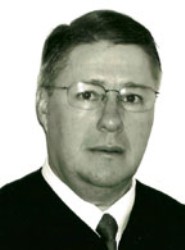 Judge Hoyer presides over a district court docket consisting of criminal cases, civil cases, domestic relations cases, juvenile cases, mental health cases, and probate cases.  Judge Hoyer is well respected in the jurisdiction and multiple respondents to the Judicial Performance Survey commented on how Judge Hoyer conducts his proceedings with dignity and treats all persons appearing before him with respect. Judge Hoyer has a calm demeanor during proceedings and allows all participants ample opportunity to speak.  Judge Hoyer’s legal rulings are reasoned and grounded in law, and he sufficiently explains the basis for both his written and oral rulings.  Judge Hoyer moves cases along at an appropriate pace and has largely met the benchmarks laid out by the Judicial Branch.  Judge Hoyer credits this success with largely deferring to attorneys as to the appropriate pace for each case, which both promotes efficiency and serves the ends of justice.

The committee interviewed Judge Hoyer and reviewed judicial survey results and accompanying comments from attorneys and community members, Judge Hoyer’s self-evaluation, and five written orders issued by Judge Hoyer in criminal, civil, and juvenile matters.  Some members of the committee were able to observe Judge Hoyer in court.

Judge Hoyer has been on the bench for nearly 34 years, first as a county court judge in Washington County, now as a district court judge.  Judge Hoyer has demonstrated himself to be a calm and respectful judge who genuinely seeks to see justice served for all.  Judge Hoyer is a great resource for the people of northeastern Colorado.