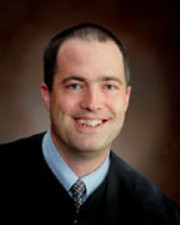 Judge Henderson’s overall combined performance score was 3.6 out of 4.  In the categories of Judicial Performance, Judge Henderson scored equal to or better than the overall average of all County Court judges in the state in Case Management, Application and Knowledge of Law, Communications, Diligence, Demeanor and Fairness.  As required by statute, the Commission considered the following criteria: Integrity: The Public Defender’s office singled Judge Henderson out for praise in this area.  They commended his treatment of those appearing before him and find him to be compassionate in the way he treats criminal defendants.  Legal Knowledge: Comments in the surveys indicated Henderson is very knowledgeable about the law.  Communication Skills: Comments from the survey indicated that his orders from the bench are clear, concise and thorough, and in pro se cases Henderson is admirable in explaining the law and the legal process. Judicial Temperament: The Commission discussed past concerns about Henderson’s demeanor in court.  Henderson acknowledged he is intense in his work and has high expectations.  While he does not apologize for his high expectations, he has worked diligently to improve in this area and to communicate his expectations better and in a manner that is helpful and not belittling. Henderson acknowledges that patience will likely be an issue for him through his career on the bench, and he is committed to working on it.  The Commission concluded this issue has been satisfactorily addressed and it will continue to be an area that Judge Henderson will prioritize.  Administrative Performance: The Commission found this area to be adequate.  Service to the legal profession and the public: During his time on the bench, Henderson was involved with Evidence Based Decision Making and the Access to Justice Committee, as well as other local non-profits.  However, because of the age of his children, he has cut back on community involvement in the last few years in order to be more engaged with his children.

The Commission reviewed judicial performance data and comments from attorneys and non-attorneys, interviewed Judge Henderson, reviewed his self-evaluation, and met with representatives of the District Attorney’s Office and the Office of the Public Defender.  The Commission was unable to observe Judge Henderson in court due to restrictions order by the Colorado Supreme Court and the Twenty-Frist Judicial District suspending normal court operations in light of public health risk posed by COVID-19.

Judge Henderson has served as a Mesa County Court judge since his appointment in January 2006 and presides over civil, criminal, misdemeanor, traffic and small claims.  Before his judicial appointment Judge Henderson was a Deputy District Attorney.  Based on the full review the Commission agrees unanimously that Judge Craig P. Henderson meets performance standards.