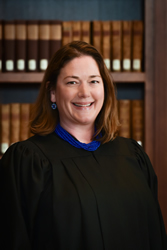 The State Commission on Judicial Performance finds that Justice Melissa Hart MEETS PERFORMANCE STANDARDS, by a vote of 11-0.  The Colorado statutory judicial performance standards are integrity, legal knowledge, communication skills, judicial temperament, administrative performance, and service to the legal profession and the public.

Justice Hart has been on the Colorado Supreme Court for just under three years and this is her first retention evaluation.  The Commission finds that Justice Hart is fair and impartial, makes decisions without regard to possible criticism, and treats parties equally regardless of race, sex, or economic status.  Comments from attorneys and judges highlighted Justice Hart’s engagement with the community; her thoughtful and respectful approach to counsel, parties, and other justices; and her exceptional intellect.  The Commission also finds her opinions to be concise, thoughtful, and well reasoned.  The Commission believes that Justice Hart is a valuable addition to the Colorado Supreme Court.

Justice Hart was appointed by Governor John Hickenlooper to serve on the Colorado Supreme Court on December 14, 2017.  Justice Hart is a Denver native, graduating from East High School.  She earned her bachelor’s degree from Harvard-Radcliffe College and her law degree from Harvard Law School in 1995.  After law school she clerked for Judge Guido Calabresi on the United States Court of Appeals for the Second Circuit and for Justice John Paul Stevens on the United States Supreme Court.  Justice Hart practiced law for several years in Washington, D.C., including as a trial attorney at the U.S. Department of Justice.  Prior to joining the Colorado Supreme Court, she was a professor at the University of Colorado Law School, where she directed the Byron R. White Center for the Study of American Constitutional Law.  Justice Hart is active in court-related and community activities, including acting as the liaison justice to the Access to Justice Commission, the Problem Solving Courts Advisory Committee, the Office of Dispute Resolution, and the Standing Committee on Family Issues.  She serves as chair of the Colorado Judicial Coordinating Council.