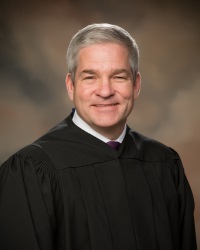 In evaluating Judge Grattan’s performance, the Commission considered the judicial criteria identified by state law—namely integrity, legal knowledge, communication skills, judicial temperament, administrative performance, and service to the legal profession and the public.  In his interview with the Commission, Judge Grattan emphasized his commitment to being a “smart, fair, and conscientious” jurist.  The Commission found Judge Grattan to be particularly strong with respect to integrity, communication skills, and judicial temperament.  The Commission observed Judge Grattan continues to gain knowledge and familiarity in addressing criminal law matters and commends his ongoing efforts in this regard.  Judge Grattan also continues to make marked improvement in his case and docket management, though he noted he is considering ways in which he might appropriately economize judicial proceedings by limiting some of the extended exchanges among parties appearing before him.  The reviewed written orders from Judge Grattan were understandable and clearly reasoned.

In addition to its personal interview with Judge Grattan and review of certain civil and criminal orders he authored, the Commission considered a written self-evaluation that Judge Grattan completed and reviewed survey responses from attorneys and non-attorneys who appeared before him.  The survey questions addressed case and docket management, application and knowledge of the law, communications, judicial demeanor, diligence, and fairness.  Judge Grattan’s marks from this survey were generally consistent with those of other county judges, and a large majority of both attorneys and non-attorneys indicate he meets performance standards.  The Commission also discussed Judge Grattan’s performance with the Chief Judge, the District Attorney, and the Public Defender. Unlike with its 2019 interim review, the Commission was unable to observe Judge Grattan in the courtroom due to Colorado Supreme Court and Twenty-First Judicial District orders suspending normal court operations in light of the public health risk posed by Coronavirus Disease 2019 (COVID-19).

Judge Grattan has served as a Mesa County Court judge since his appointment in January 2017 and presides over civil, felony bonding, misdemeanor criminal, traffic, and small claims matters.  Before his judicial appointment, Judge Grattan had a contract, corporate, and civil law practice in Grand Junction.  In evaluating Judge Grattan’s performance as a judicial officer, the Commission was impressed with his candor, positivity, and thoughtfulness—which extend to his efforts to identify and counter implicit bias that may affect his rulings.  The Commission also noted Judge Grattan’s engagement with the community, including service on the Mesa County Criminal Justice Advisory Committee as well as the Access to Justice Committee.  The Commission finds Judge Grattan to be valuable member of the bench and believes his performance as a judicial officer reflects well on the Twenty-First Judicial District.