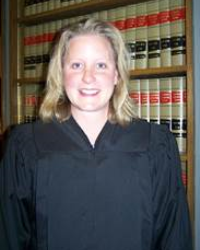 Judge Gerhart garnered some of the best scores for County Court Judges the Commission reviewed this cycle, highlighted by a score of 3.9 out of 4 for Fairness and 3.7 for both Communications and Demeanor.  Ninety-five percent of the attorneys who answered the survey agreed that Judge Gerhart meets performance standards.  Comments provided with the surveys emphasized her adherence to protocol, clear communications, intelligence, professionalism, expertise and compassion.

The Commission interviewed Judge Gerhart, observed her in Court, reviewed her self-evaluation, written opinions, judicial performance data, comments from attorneys and non-attorneys, and the judicial performance survey results from 2019 and 2020.  It should be noted that a new methodology for the survey was used this year to which lower response rates may be attributed. This methodology affected all judges across the board and is not an explanation for individual results.  The Commission also spoke with representatives of the District Attorney’s Office and the Public Defender’s Office.

Judge Gerhart was appointed to the bench on March 30, 2017.  She began her legal career at the District Attorney’s Office as an intern during her first and second years of law school.  Soon after passing the bar in 2001 she was offered a position as a County Court Deputy District Attorney.  Judge Gerhart was promoted to the position of Senior District Attorney in 2004 and served as the County Court Senior DA and Juvenile Court Senior DA from 2004 through 2010. She was promoted to Chief Deputy District Attorney in 2011 and served in that capacity until being appointed to the bench.  Judge Gerhart’s docket includes domestic violence cases, restraining orders, evictions, small claims, misdemeanor criminal cases and miscellaneous traffic matters.