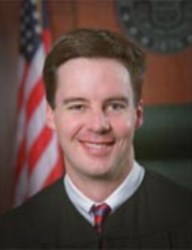 The Commission considered the judicial criteria identified by state law which include integrity, legal knowledge, communication skills, judicial temperament and administrative performance. In survey evaluations by attorneys, Judge Flynn performed consistently with other judges in Colorado in his communications and demeanor. He exceeded the statewide judicial average in fairness and in a survey of appellate judges. However, among attorneys, Judge Flynn scored below the survey average for other judges in Colorado in case management, application and knowledge of the law, and in diligence.  Sixty-seven percent of attorney respondents reported Judge Flynn meets performance standards, compared to 83% of district judges statewide. Non-attorney survey respondents reported that Judge Flynn met and exceeded in all criteria, with 100% reporting that he meets performance standards.  Judge Flynn’s areas of strength included comments that he was courteous to all parties, was fair and impartial to both sides and that he was well versed in the law.  Some attorneys expressed concerns with Judge Flynn’s judicial temperament, judicial consistency, and unpredictable rulings more generally. Commissioners had some concern about occasional instances of judicial decisions being impaired by bias against specific lawyers.  Judge Flynn acknowledged one instance in which his frustration with a particular attorney impeded his judgment in making a ruling that led to a reversal by the Court of Appeals in one case that the Commission reviewed.

The Commission conducted a personal interview of Judge Flynn and also considered the Judge’s self- evaluation, written opinions offered by Judge Flynn, and the Judicial Performance Survey conducted by the State Judicial Department. The Commission was unable to observe Judge Flynn in the courtroom due to the public health risk posed by COVID-19.  The commission had opportunity to speak to the District Attorney and the head of the Public Defender’s office and considered their opinions.  The Commission also reviewed rulings provided by the Judge as well as reversal rulings issued by the Court of Appeals for cases before Judge Flynn.  In the Self-evaluation, Judge Flynn noted difficulties with certain attorneys in his courtroom.  Judge Flynn reported that he made changes to how he conducted plea agreements and bond hearings in his courtroom to deal with these challenges and he observed that these changes have made a difference in the courtroom.

Judge Flynn serves as the Chief District Court Judge for Mesa County and has served in this capacity since 2016.  While maintaining a full docket and presiding over civil, criminal and juvenile matters, as Chief Judge he also administers judicial operations and judicial staffing for the 21st Judicial District and serves as an administrator to the probation department for Mesa County.  Besides serving as Chief Judge, Judge Flynn has served as a mock trial judge for school competitions and regularly volunteers with United Way of Mesa County, Special Olympics, and the Food Bank of the Rockies.