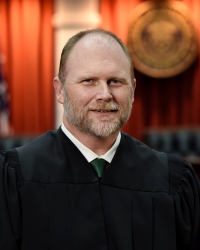 The Commission based its findings on a review of the judge’s writings, a WebEx interview with him, and a review of the results of a survey of attorneys and non-attorneys who have appeared before him conducted by the state Office of Judicial Performance.  The ratings are based on a scale of (1) – poor, through (4) – excellent.  Judge Finn’s ratings are consistently high, and are, in each category, at or above the average score for District Court Judges statewide.  He earned, for example, a 3.7 score for “Providing written communications that are clear, thorough and well-reasoned,” a 3.8 for “Giving the proceedings a sense of dignity,” and a 4.0 for “Treating participants with respect.”

Eighty-eight percent of attorney respondents to the survey agreed with the 17th District Judicial Performance Commission’s finding that Judge Finn meets performance standards.  The results of those surveys demonstrate that members of the legal community and the general public hold him in high esteem because of his professionalism and compassionate demeanor.  Many of the people surveyed commented specifically on Judge Finn’s even temperament and his knowledge of the law.

In addition to his work on the bench, Judge Finn continues to teach as an Adjunct Professor at the University of Colorado School of Law, where he has taught Evidence and Criminal Procedure, and is scheduled to teach Trial Advocacy in the fall.  He also regularly conducts legal trainings throughout Colorado including, in 2020, a course on Effective Lawyering with WebEx, the on-line platform used by attorneys to appear remotely in his courtroom. Prior to his appointment to the District Court, Judge Finn worked for commercial law firms in Los Angeles and Denver, and as a law clerk for a judge on the Colorado Court of Appeals. He also served as Senior Deputy District Attorney in Adams and Broomfield Counties, and as Chief Trial Deputy in the Boulder District Attorney's Office. Judge Finn received his undergraduate degree from the University of Colorado and his law degree from Loyola Law School in Los Angeles, CA. His current docket consists of 100% criminal work.