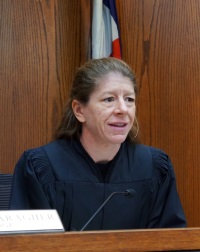 Judge Faragher’s ranking by attorneys on categories of judicial performance (case management, application and knowledge of law, communications, diligence and demeanor) were at or near the average for all county court judges standing for retention.  Judge Faragher scored higher than average in the fairness category.  The Commission’s courtroom observation, interview, and reviews of written material provide a picture of a judge consistent with the positive comments of survey respondents.  Judge Faragher has been described by attorneys as “friendly and efficient manner on the bench,” “very careful to go over the law relating to her rulings with the parties” and an “excellent jurist.”  It was also noted that her docket management has improved over time.  Based on these findings, the Commission unanimously agreed that Judge Faragher meets performance standards in all categories.

Judge Faragher was appointed to the Denver County Court in July 2014. Prior to her appointment, Judge Faragher served as a Denver County Court magistrate, Pro Tem Judge for the City of Westminster, and was an attorney in private practice specializing in criminal defense, employment law, and mental health court appointments.  Judge Faragher obtained her Juris Doctorate degree from Case Western Reserve University in Cleveland, Ohio, and her undergraduate degree from Florida Atlantic University in Boca Raton, Florida.  She is active in the Denver Access to Justice Committee, and the Denver Bench Bar Committee.