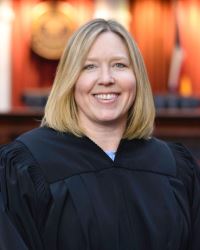 Judge Ernst was appointed by Governor Hickenlooper on December 17, 2016, as a District Judge for the Tenth Judicial District.  Judge Ernst has presided over dockets handling probate, domestic, mental health, civil and truancy cases.  The Commission conducted a personal interview with Judge Ernst, reviewed her judicial opinions, transcript of a hearing, performed extensive courtroom observation, interviewed local agencies and reviewed the results of the 2020 Judicial Performance Survey Report.  On the Survey, all surveyed groups had a sufficient result rate from those who had experience with Judge Ernst.  Of the attorneys responding to the survey, 80% indicated that Judge Ernst met performance standards, 10% indicated Judge Ernst did not meet performance standards and 10% had no opinion.  Of the non-attorneys, 100% indicated she met performance standards.  Judge Ernst indicated that the appointment to civil cases and mental health cases were challenges as they were both areas of law she had not previously practiced.  However, Judge Ernst through practical experience on the bench, extensive research of statutes and caselaw, and consulting with peers has improved in these areas of law.

Judge Ernst’s areas that garnered the most negative comments were Case Management and Diligence.  Judge Ernst scored a 3.2 in both categories whereas the average score for all District Judges in Colorado in both categories was 3.4.  Judge Ernst agrees that she needs to improve her timeliness on issuing orders.  Judge Ernst excelled in areas of Application of Knowledge of Law (3.4 whereas the average for all Judges is 3.3), Demeanor (3.6 compared to 3.5 average) and Fairness (4.0 compared to 3.7 as an average).  Attorneys and Non-Attorneys commented that Judge Ernst was respectful and patient with all participants, bright, hardworking and competent.  Furthermore, it was perceived that Judge Ernst truly is concerned about the cases and the parties and wants to do a good job.  Several parties commented about Judge Ernst’s positive demeanor in the courtroom.  During courtroom observations, Judge Ernst was observed as “thinking outside the box” especially with regard to the truancy cases.  It was clear that Judge Ernst truly cares about the students and families and strives to find ways to solve the truancy issue in a way that benefits the student, family and school.  Judge Ernst is very thoughtful when dealing with pro-se parties in her courtroom and explains things in a manner that are easily understood without providing legal advice.

Judge Ernst’s professional goals are to improve her case management and to rule on motions in a timely manner.  Judge Ernst has implemented methods towards this goal already by reviewing all of the pleadings prior to hearing the case in order to better understand the issues before the Court and to try to rule directly from the bench rather than entering a written order at a later date.  Based on the Commission’s overall evaluation, Judge Ernst meets or exceeds performance standards.