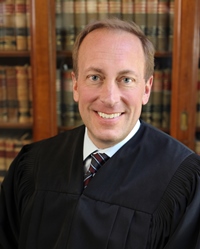 The Second Judicial District Commission on Judicial Performance, on a vote of 10-0, unanimously finds that the Honorable John Eric Elliff MEETS PERFORMANCE STANDARDS.

The Commission conducted a personal interview with Judge Elliff, reviewed orders he authored, observed him in court through online proceedings and by listening to recordings, and reviewed survey responses from attorneys and non-attorneys who had experience with Judge Elliff.

Judge Elliff was appointed to the Second Judicial District Court in 2011.  Before his appointment, he was a partner with Husch Blackwell, LLP.  He earned his Juris Doctor from the University of Colorado School of Law where he graduated Order of Coif and earned a Bachelor of Science from Washington University in St. Louis.  Judge Elliff volunteers as a mentor for Law School Yes We Can, an organization that mentors students to support greater diversity in the legal profession.