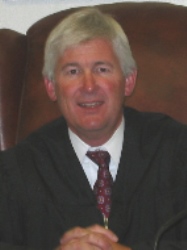 Judge Egelhoff was appointed to the District Court in July 1999.  He graduated from Colorado State University and from the University of Colorado School of Law.  Judge Egelhoff worked as a Chief Deputy Denver District Attorney before he was appointed to the bench.  Judge Egelhoff also participates in community service activities.  He is a sitting member of the Colorado Supreme Court’s Rules of Evidence, Pattern Criminal Jury Instruction Committees, and the commissioners understand he has written materials for training other judges on trial procedures.