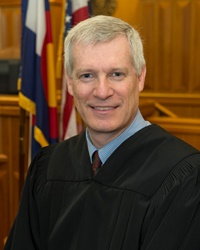 The Eighth Judicial District Commission on Judicial Performance unanimously agrees by a vote of 10-0 that the Honorable Kraig Ecton MEETS PERFORMANCE STANDARDS.

Judge Ecton primarily presides over criminal, civil, and traffic cases.  Judge Ecton is diligent, efficient, and respectful.  He takes time to ensure that parties are heard and explains court proceedings clearly to self-represented parties.  Judge Ecton is prepared for his court proceedings, well-versed in the law, and drafts well-researched written orders.  The Commission was impressed with Judge Ecton’s thoughtful and self-reflective analysis of his performance.  He has taken many proactive steps to improve his skills as a judge, including reflecting on his procedures and consulting with other judges throughout the state.  Certain attorneys have noted that Judge Ecton moves cases too quickly through the process.  When the Commission asked Judge Ecton about this critique, he thoroughly explained his rationale for managing his docket, which allows matters to be resolved faster and maintains flexibility.

The Commission conducted a personal interview with Judge Ecton, reviewed opinions he authored, observed him in court, and reviewed judicial performance survey responses from attorneys and non-attorneys who appeared in Judge Ecton’s courtroom.  A total of thirty-four individuals, thirty attorneys and four non-attorneys, believed they had sufficient knowledge to express their opinion of Judge Ecton.  When asked whether Judge Ecton meets performance standards: Of the attorneys responding to the survey, 86% answered yes; 14% answered no; and 0% had no opinion. Of the non-attorneys responding to the survey, 75% answered yes; and 25% answered no.  The small number of non-attorney responses makes this percentage difficult to consider as a reliable measure.  It should be noted that for the retention cycle in 2020, different methods for non-attorney survey distribution and collection were utilized statewide on a trial basis.  This transition may account for the low response rate from non-attorneys.  Judge Ecton received ratings similar to the statewide average among all county court judges standing for retention with regard to the following areas surveyed: Case Management, Application and Knowledge of Law, Communications, Diligence, and Demeanor.

Judge Ecton was appointed to the County Court bench in 2014. Judge Ecton received his undergraduate degree in Mathematics from Colorado College, his master’s degree in Business Administration from Colorado State University, and his law degree from the University of Colorado.  Prior to being appointed to the bench, Judge Ecton served as a Deputy District Attorney for Larimer County and an Assistant City Attorney for the City of Fort Collins.