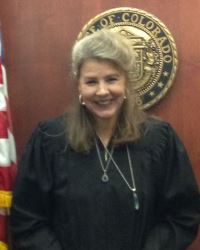 Judge DuBois was one of the highest-rated jurists reviewed this cycle, highlighted by scores of
3.7 out of 4 for Knowledge and Application of the Law, 3.7 for Communications and 3.8 for Demeanor.  Ninety-one percent of the attorneys who answered the survey agreed that Judge DuBois meets performance standards.  Comments provided with the surveys emphasized her fairness, compassion, knowledge of the law, and the “street smarts” to cut through legal noise to identify important issues.  When asked to identify weaknesses for Judge DuBois, few respondents identified specific weaknesses although some did point out that Judge DuBois’ docket is extremely heavy.  After observation and interviews, commission members commented that Judge DuBois welcomed feedback and demonstrated introspection for how to continue to improve as a District Court Judge.  In her self-evaluation, Judge DuBois wrote specifically of the care she took with pro se participants in her court to insure fairness and equal application of justice.

The Commission interviewed Judge DuBois, observed her in Court, reviewed her self-evaluation, written opinions, judicial performance data, comments from attorneys and non-attorneys, and the judicial performance survey results from 2017 and 2020. It should be noted that a new methodology for the survey was used this year to which lower response rates may be attributed. This methodology affected all judges across the board and is not an explanation for individual results.  The Commission also spoke with representatives of the District Attorney’s Office and the Public Defender’s Office.

Judge DuBois was appointed to the bench on August 17, 2005.  Prior to her 15 years of service as a judge, Judge DuBois served 9 years as a District Court Magistrate in the 4th Judicial District. She received her B.A. in 1982 from Colorado College and her J.D. in 1986 from the University of Colorado School of Law.  Judge DuBois handles criminal and domestic relations cases in a near 50:50 ratio.