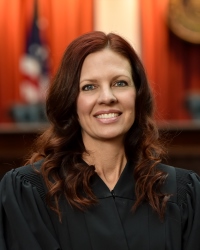 The Seventeenth Judicial District Commission on Judicial Performance agreed unanimously (8-0) that the Honorable Caryn A. Datz MEETS PERFORMANCE STANDARDS.  Two Commission members did not participate in the voting.

The Commission is impressed by several aspects of Judge Datz’s performance, including her courtroom demeanor and preparation, especially with her domestic-relations docket; her excellent communication and respect with and for attorneys and non-attorneys in her courtroom; her interest in matters before her; and her thorough and well-reasoned written decisions, for which she received a 4.0 out of 4.0 from appellate judges.  These qualities demonstrate her empathy and compassion, her willingness to improve, and her humility with parties and attorneys.  The Commission is also impressed by her willingness to continue her professional development, as well as her commitment to the 17th Judicial District community. The Commission believes Judge Datz is genuinely committed to, and is effectively ensuring, the fair, transparent and speedy application of justice in her courtroom.  The Commission did note that Judge Datz needs to improve her ability to identify and analyze relevant facts as she makes her decisions.

Judge Datz is a District Court judge in the Seventeenth Judicial District covering Adams and Broomfield Counties.  She was appointed to the District Court bench in August of 2018 by Governor John Hickenlooper.  Prior to her appointment, Judge Datz was a Chief Trial Deputy for the 20th Judicial District Office of the District Attorney in Boulder County.  She earned her undergraduate degree from the University of Wisconsin in 1998 with a B.A. in Spanish and English and her juris doctorate from University of Miami School of Law in 2001.