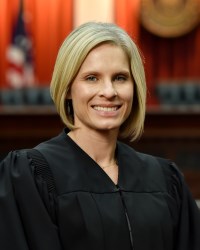 The Eighteenth Judicial District Commission on Judicial Performance unanimously agrees by a vote of 9-0, with one Commissioner absent from voting, that Judge Chantel E. Contiguglia MEETS PERFORMANCE STANDARDS.

Judge Contiguglia presides over a county court docket that is 90% criminal (45% misdemeanor and 45% traffic), 5% civil and 5% small claims.  Judge Contiguglia’s demeanor is described as warm and personable, as well as respectful and patient with all parties.  She is dignified and fair while maintaining a professional decorum in the courtroom.  She is well prepared, is an excellent communicator and possesses a strong knowledge of the law, which she often uses to teach new attorneys.  She is prompt in her rulings and both her oral and written decisions are clear and concise.  Docket and case management challenges, especially setting too many cases for trial on the same day, is the only concern for the commission.  The commission recommends that Judge Contiguglia review her docket and case management processes with respect to this issue.  Judge Contiguglia stays current on the law by reviewing the Colorado Court of Appeals and the Colorado Supreme Court decisions weekly.  She also sends opinions on to her colleagues when she finds information relevant to their areas of expertise.  Based on these findings the Commission agrees that Judge Chantel E. Contiguglia meets performance standards.

The Commission conducted a personal interview with Judge Contiguglia, reviewed opinions she authored, observed her in court and reviewed judicial performance survey responses from attorneys and non-attorneys.  The commission also interviewed the District Attorneys, Probation, Public Defenders and the Chief Judge.  The surveys reflected personal opinions on Judge Contiguglia’s Case Management, Application and Knowledge of the Law, Communications, Diligence, Demeanor and Fairness.  Of the thirty-seven (37) completed surveys returned, Judge Contiguglia achieved an overall performance rating of 3.5 out of a possible 4.0, compared to all County Court Judges at a rating of 3.4.  Her ratings for meeting performance standards from attorneys was 86% and 77% from non-attorneys.  A total of twenty-three (23) attorneys and fourteen (14) non-attorneys responded to the judicial performance surveys expressing their opinion of Judge Contiguglia.

Chantel E. Contiguglia was appointed to the Arapahoe County Court in August 2018.  She earned her B.A. from Mesa State College in 2002 and her law degree from the University of Denver Sturm College of Law.   Prior to her appointment to the bench, Judge Contiguglia worked as a Senior Deputy Public Defender at the Office of the State Public Defender in Golden, Colorado from 2007-2018, prior to her appointment to the bench.  She handled felonies as well as traffic, misdemeanor and juvenile cases and supervised other public defenders.  Judge Contiguglia has volunteered in mock trial competitions over the past two years she has been on the bench.  She also taught for the National Institute for Trial Advocacy (NITA) program hosted in Boulder, CO for the Rocky Mountain Building a Trial Skill Program.