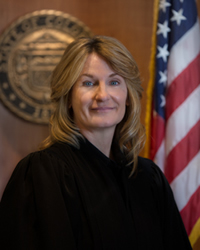 Judge Carpenter presides over misdemeanor, traffic, civil and small claims cases.  Judge Carpenter views her court as a problem-solving court that seeks to address underlying problems contributing to certain offenses.  Judge Carpenter ensures she is well-prepared for court by conducting research on legal issues presented in the cases before her docket.  She is recognized for her directness, her strong grasp of the rules of evidence, as well as case law.  Judge Carpenter is good at explaining the rationale for motions, sentences, and decisions.  She is a role model in the way she interacts with and helps jurors.

Judge Carpenter received her undergraduate degree from Metropolitan State College and later obtained her Juris Doctorate from Creighton University School of Law.  Before taking the bench, Judge Carpenter was a Chief Deputy District Attorney for the City and County of Denver.  She was appointed to the Jefferson County Court in 2008 and has handled traffic, criminal, and misdemeanor cases.  An active member of the community, she judges moot court for the University of Denver and the University of Colorado law schools and teaches at the National Institute for Trial Advocacy.  Judge Carpenter is a member of the Criminal Justice Coordinating Committee and the Interstate Commission for Adult Offender Supervision.