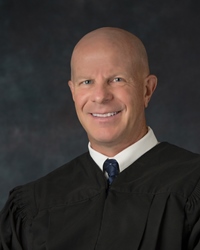 Judge Butler is currently assigned to a family law docket and has previously presided over civil, juvenile, criminal, mental health, and integrated treatment court dockets.  Judge Butler is committed to ensuring that the people in his courtroom feel that they have been heard when their time in court ends.  His written decisions appear thorough and clear.  Judge Butler’s survey scores were generally positive, with high ratings for his fairness and case management.  Judge Butler attends continuing legal education presentations in areas of law relevant to his current docket, and also provides instruction in those same forums.  Judge Butler volunteers as a boxing official and board member of USA Boxing, a non-profit organization, and does volunteer work for Community Food Share.  He also serves on the Judicial Legislative Review Committee that reviews draft legislation before the Colorado legislature and provides input regarding the likely costs of proposed new laws.

The Performance Commission interviewed Judge Butler, observed him in court or listened to recordings of his court proceedings, read opinions he has written, solicited and received comments from the Boulder District Attorney and the co-chairs of the Boulder Criminal Defense Bar, and reviewed performance survey responses from attorneys and non-attorneys who had been in Judge Butler’s courtroom.  Among the survey questions was “based on your responses to the previous questions related to the performance evaluation criteria, do you believe Judge Butler meets judicial performance standards?”  Of the 56 attorneys who responded to the survey, 78 percent said yes, 11 percent no, and 11 percent had no opinion.  Of the nine non-attorneys responding to the survey, 100 percent said that Judge Butler meets performance standards.  Overall, the Performance Commission found Judge Butler to be level-headed, enthusiastic about his job, and committed to meeting the challenges of the district court.

Judge Butler was appointed to the Boulder District Court in October 2011.  Prior to his appointment, he served from 2009 to 2011 as a magistrate in the 18th Judicial District.  Before entering the judiciary, Judge Butler was a partner in the law firm of Lamm & Butler, where he focused on civil litigation and criminal defense.  Judge Butler earned his undergraduate degree from Keene State College and his law degree from Gonzaga University.