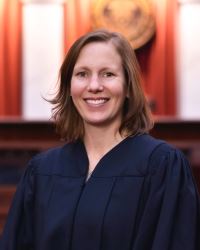 Judge Burgemeister was appointed to the Gunnison County Court in January of 2017.   Prior to her appointment Judge Burgemeister had served as Family Court Facilitator for the Seventh Judicial District. Judge Burgemeister is active in the community, subject to the limitations presented by her office.  She guest lectures at Western State Colorado University and is a run buddy for IRun4.