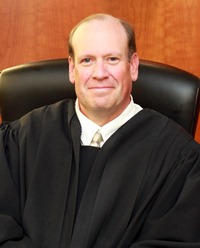 Judge Burback presides over a mixed docket with most cases covering misdemeanor, traffic, criminal, and civil cases.  County court continuously sets a record number of trials each year.  This heavy caseload presents significant challenges to all the county court judges, not the least of which is managing a fast-paced docket and ensuring that cases are ready for trial.  There is a perception among the lawyers that frequently practice in Judge Burback's courtroom that he rushes cases through his docket at the expense of trying cases.  The Commission recommends that Judge Burback foster an atmosphere where litigants feel that they got their day in court, rather than resolving cases quickly and encouraging settlements.  Because of this, it may also appear that Judge Burback struggles with case management.

To assess Judge Burback’s performance, the Commission conducted an interview, read opinions he authored, observed him in court, reviewed comments received from interested parties, and considered survey responses from those who have had experience with Judge Burback.  From the surveys, Judge Burback received an overall grade of 3.4, on a 4.0 scale, compared to the 3.4 overall score of all county judges in Colorado.  Of the attorney responses, 88 percent agreed that Judge Burback meets performance standards, while 6 percent indicated that he does not meet performance standards, and 6 percent had no opinion.  Only one non-attorney responded to the survey, indicating they had no opinion.
His performance across categories of case management, application and knowledge of the law, communications, diligence, and demeanor demonstrate that he meets or exceeds performance standards.  The survey responses mentioned Judge Burback’s strong communication skills.  He is clear, concise, and personable.  No matter what kind of case is presented, Judge Burback creates an atmosphere where people feel valued.  One surveyor was delighted to meet Judge Burback post trial, sharing it was an interesting trial, with an unexpected outcome, yet he learned a lot, stating the Judge was “fantastic, on point, and did a great job.”

Judge Burback has been a judicial officer since 2006, as he shared, “public service is my career.” Judge Burback received his BA degree from Colorado State University and his law degree from the University of Baltimore School of Law.  Before his appointment to the court, Judge Burback was a Deputy District Attorney and a District Court Magistrate for the First Judicial District. Judge Burback also served as a judge advocate in the U.S. Navy.  Outside of the courtroom, he volunteers for Operation Standby, a pro bono project through the American Bar Association to assist U.S. military members and their dependents with legal issues.