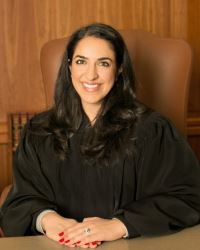 The Eighth Judicial District Commission on Judicial Performance unanimously agrees by a vote of 10-0 that the Honorable Susan Blanco MEETS PERFORMANCE STANDARDS.

Judge Blanco presides over juvenile (terminations/adoptions), domestic relations, probate, civil, and criminal cases.  Her strengths are noted for her judicial temperament, integrity, communication skills and service to the community.  A varied docket, such as that handled by Judge Blanco, can be challenging; however, Judge Blanco stated that she continues to stay educated in such diverse areas through continuing her legal education, consulting with other judges, and inviting parties to provide case law during proceedings.  Judge Blanco reports that she learns from the judicial performance evaluation process, using the comments to become a better judicial officer.  Comments received by the Commission indicated that Judge Blanco may lean toward prosecution or sentence too harshly, however, others found her to be fair and consistent in applying the law.  Judge Blanco treats participants in her courtroom with respect and courtesy and makes sure all participants understand the proceedings.  The Commission observed these qualities throughout her evaluation and interview.

The Commission conducted a personal interview with Judge Blanco, reviewed opinions she authored, observed her in court, and reviewed judicial performance survey responses from attorneys and non-attorneys who appeared in Judge Blanco’s courtroom. A total of sixty-one individuals, fifty-six attorneys and five non-attorneys, believed they had sufficient knowledge to express their opinion of Judge Blanco.  When asked whether Judge Blanco meets performance standards: Of the attorneys responding to the survey, 88% answered yes; 4% answered no; and 8% had no opinion. Of the non-attorneys responding to the survey, 50% answered yes; and 50% answered no.  The small number of non-attorney responses makes this percentage difficult to consider as a reliable measure.  It should be noted that for the retention cycle in 2020, different methods for non-attorney survey distribution and collection were utilized statewide on a trial basis.  This transition may account for the low response rate from non-attorneys.  Judge Blanco received ratings equal to or above the statewide average among all district court judges standing for retention in the following categories: Case Management, Application and Knowledge of Law, Communications, Demeanor, and Diligence.  Five appellate judges responded to surveys and rated Judge Blanco above the statewide average for District Court Judges standing for retention.

Judge Blanco was appointed to the District Court bench in 2016.  She completed her undergraduate studies at Colorado State University in 2000 and her Juris Doctorate from the University of Colorado School of Law in 2003.  Judge Blanco served locally as a Deputy District Attorney until 2007, then practiced privately until 2016 in criminal law, delinquency, dependency and neglect, and municipal prosecution.  Judge Blanco remains active in the community, including serving on the Colorado Access to Justice Commission, the Colorado Bar Association’s Criminal Law Executive Council, and teaching at Colorado State University.