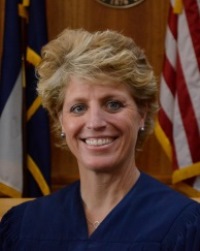 The Eighth Judicial District Commission on Judicial Performance unanimously agrees by a vote of 10-0 that the Honorable Mary Joan Berenato MEETS PERFORMANCE STANDARDS.

Judge Berenato presides over criminal, traffic, and civil matters.  The Commission finds that Judge Berenato has excelled in making sure all participants understand the courtroom proceedings, giving the proceedings a sense of dignity, respecting those appearing before her, and treating people who represent themselves fairly.  Judge Berenato values speaking directly to defendants so that she can better understand them and she prides herself on equal treatment for all who appear before her.  Judge Berenato is well-prepared for the cases appearing before her.  She identifies and analyzes the relevant facts and issues rulings and decisions promptly.  One criticism of her courtroom is that Judge Berenato does not accept fully stipulated plea agreements in criminal cases.  During her interview, Judge Berenato explained that she does accept partially stipulated agreements but believes the length and type of jail sentence to be imposed remains the duty of the Court.  The Commission believes that Judge Berenato has the judicial temperament and skills needed to perform well as a judicial officer

The Commission conducted a personal interview with Judge Berenato, reviewed opinions she authored, observed her in court, and reviewed judicial performance survey responses from attorneys and non-attorneys who appeared in Judge Berenato’s courtroom.  A total of forty-nine individuals, thirty-five attorneys and fourteen non-attorneys, believed they had sufficient knowledge to express their opinion of Judge Berenato.  When asked whether Judge Berenato meets performance standards: Of the attorneys responding to the survey, 75% answered yes; 9% answered no; and 16% had no opinion. Of the non-attorneys responding to the survey, 100% answered yes.  The small number of non-attorney responses makes this percentage difficult to consider as a reliable measure.  It should be noted that for the retention cycle in 2020, different methods for non-attorney survey distribution and collection were utilized statewide on a trial basis.  This transition may account for the low response rate from non-attorneys.  Responses from the survey scored Judge Berenato higher than the average for all county court judges standing for retention in the state in the categories of Communications.  She rated equal to in the categories of Application and Knowledge of Law, Diligence, and Demeanor, and was only slightly lower than average in the area of Case Management.