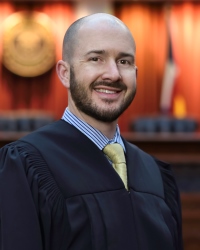 The Eighteenth Judicial District Commission on Judicial Performance unanimously agrees by a vote of 9-0, with one Commissioner absent from voting, that Judge Andrew Baum MEETS PERFORMANCE STANDARDS.

Since January 6, 2020, Judge Baum has presided over a District Court docket that is 98% domestic.  Prior to this assignment, he was on a 100% criminal docket from August 1, 2017 through January 5, 2020.  Judge Baum’s demeanor is described as being respectful, fair, and a professional.  He is well prepared and is open to reviewing cases provided by the parties.  The Commissioners were pleased with their courtroom observations of Judge Baum.  This is Judge Baum’s first performance review.  The Commission also conducted an interim review in 2019, where concerns regarding some areas including, the application and knowledge of law, clarity, consistency of rulings, and control over the proceedings were addressed.  Some recent survey responses expressed concerns regarding his temperament and a gender bias.  Judge Baum has been diligent in addressing concerns raised and has taken appropriate actions to address concerns.  The Commission has noted significant improvement and based on these findings the Commission agrees that Judge Andrew Baum meets performance standards.

Andrew Baum was appointed to the District Court in the 18th Judicial District in August 2017.  He earned his B.A. in 1999 and his law degree in 2002 from the University of Notre Dame.  Prior to his appointment, Judge Baum worked as a Magistrate for the 18th Judicial District, served in the Denver District Attorney’s Office, and served in the U.S. Army Judge Advocate General’s Corps.  Judge Baum’s service to the legal profession and the public is impressive.  He has volunteered in yearly local high school mock trial competitions and serves on the Colorado Bar Association commission on criminal law.  He is also a member of the board of the Arapahoe County Bar Association and serves as the Courthouse Liaison.  He is involved with the executive committee for the Notre Dame Lawyers Committee, the Arapahoe County Justice Coordinating Committee, and the Thompson G. Marsh Inn of Court as a Pupilage Group Leader.