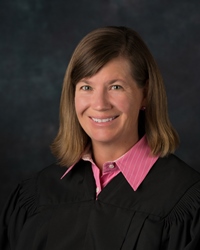 During her current term in office, Judge Bakke has presided over criminal, domestic relations, juvenile, probate and mental health matters in Boulder County, Colorado.  Judge Bakke’s demeanor is respectful, intelligent, compassionate and patient.  She manages trials well and pays close attention to the personal circumstances and needs of all litigants.  She demonstrates a good sense of humor that helps to put participants in her courtroom at ease.  Her written decisions are clear, concise and grounded in the law. She is an effective administrator in her role as Chief Judge and has shown leadership in response to the coronavirus pandemic.  She participates in public service by speaking at schools, judging mock trial competitions, and volunteering for the District Attorney’s Fresh Start program.

The Performance Commission interviewed Judge Bakke, observed her in court or listened to recordings of her court proceedings, read opinions she has written, solicited and received comments from the Boulder District Attorney and the co-chairs of the Boulder Criminal Defense Bar, and reviewed performance survey responses from attorneys and non-attorneys who had been in Judge Bakke’s courtroom.  Among the survey questions was “based on your responses to the previous questions related to the performance evaluation criteria, do you think Judge Bakke meets judicial performance standards?” Of the 42 attorneys responding to the survey, 97 percent answered yes, none answered no, and three percent had no opinion.  Of the 26 non-attorneys responding to the survey, 100 percent answered yes. Overall, Judge Bakke is an intelligent, caring and effective judge who plays a significant leadership role.

Judge Bakke was appointed to the Boulder District Court Bench in January of 2011.  Prior to her appointment she was in private practice at Kennedy & Bakke focusing on criminal defense and dependency and neglect work.  Before entering into private practice, she was a prosecutor for 6 years in Boulder County and 11 years in Jefferson County.  During this time, she served as the Chair of the Sex Offender Management Board.  She has taught nationally and internationally on trial skills and the prosecution of sexual offenses.  She graduated from the University of Denver College of Law and was admitted to the Colorado Bar in 1990. Judge Bakke was appointed Chief Judge of the Twentieth Judicial District in November 2017.