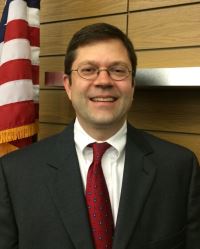 Judge Bain is the Chief Judge for the Fourth Judicial District.  He was appointed to the bench on January 1, 2011.  Judge Bain consistently scores above average when compared to all District Court Judges.  One hundred percent of attorneys who responded to the 2020 Judicial Performance Survey said Judge Bain meets performance standards.  Notable survey scores include 3.8 in Case Management (above the average of 3.4), Knowledge of the Law at 3.8 (above the average of 3.3), and 3.8 for Demeanor (above the average 3.5).  Judge Bain also scored above average in Communications and Diligence.  The Commission also looked at Judge Bain’s 2017 survey results and found he had nearly identical scores and scored above average in every category compared to other District Court Judges.  The Commission found that Judge Bain shows self-awareness in his comments and written materials, and agreed his writing is excellent and thoughtful.

The Commission interviewed Judge Bain, observed him in Court, reviewed his self-evaluation, written opinions, judicial performance data, comments from attorneys and non-attorneys, and the judicial performance survey results from 2017 and 2020.  It should be noted that a new methodology for the survey was used this year to which lower response rates may be attributed. This methodology affected all judges across the board and is not an explanation for individual results.  The Commission also spoke with representatives of the District Attorney’s Office and the Public Defender’s Office.

Judge Bain’s docket consists of 30% civil, 20% domestic Relations, and 50% criminal cases. Judge Bain graduated from Middlebury College in 1990 and after a short stint as an English teacher he went to Cornell Law School in 1996.  After law school, Judge Bain worked in private practice in Denver, as a Deputy District Attorney in the 4th Judicial District Attorney’s Office and for the City of Colorado Springs.