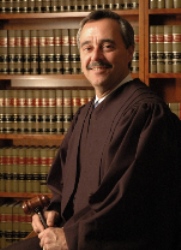 Judge Arp presides over criminal, civil, and domestic relations cases.  Judge Arp’s performance was evaluated in the areas of integrity, legal knowledge, communication skills, judicial temperament, administrative performance, and service to the legal profession and the public. He received very positive reviews by attorneys and non-attorneys.  Judge Arp does not let, external factors influence his decisions, rather he reaches well-reasoned legal conclusions based upon evidence and established law.  Judge Arp communicates professionally with attorneys and parties concerning substantive matters.  He demonstrates a thorough grasp of the rules of evidence and applies them fairly.  Judge Arp communicates orally and in writing with clarity of expression and reasoning.  He is respectful to jurors, attorneys, non-attorneys, witnesses, victims, and court staff.  He also manages his workload effectively and is consistently prepared for hearings and trials.  He understands that unrepresented parties may lack familiarity with the legal system, and he takes affirmative steps to help.  For parties without counsel in civil and domestic relations cases, Judge Arp schedules pre-trial conferences to explain the court process and expectations at hearings.  Judge Arp reviews opinions as they are issued by the appellate courts to stay abreast of current law.  Judge Arp is deliberate and thoughtful. Inexperienced attorneys could benefit from more guidance from Judge Arp.

The Commission conducted an interview with Judge Arp, reviewed opinions he authored, observed him in court, and reviewed surveys and comments received from interested parties.  One of the survey questions asked whether Judge Arp met judicial performance standards, 88 percent of attorneys responded yes, 9 percent said no, and 2 percent had no opinion.  Due to changes in the survey collection process, limited responses were collected from non-attorney respondents, such as jurors, litigants, witnesses, and court personnel.  The Commission looks forward to a larger data sample for these populations in the future.  Judge Arp’s overall performance survey score rated him above all other District Court Judges being evaluated.  For the individual categories of case management, application and knowledge of the law, communications, diligence, demeanor, and fairness, Judge Arp scored higher than all other District Court Judges being evaluated.

Judge Arp was appointed to the First Judicial District Court in July of 2006.  Before his appointment, Judge Arp was engaged in private practice with the law firm of Bradley, Devitt, and Arp, PC.  He earned his undergraduate degree from Moorhead State University and his J.D. from the University of Colorado School of Law.  He is involved in a variety of community service activities including High School Mock Trial and the Access to Justice Committee.