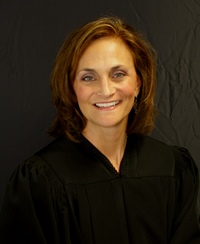 The Eighteenth Judicial District Commission on Judicial Performance unanimously agrees by a vote of 9-0, with one Commissioner absent from voting, that Chief Judge Michelle Ann Amico MEETS PERFORMANCE STANDARDS.

In addition to her administrative responsibilities for the 18th Judicial District, Chief Judge Amico presides over a full criminal and probate (including mental health) docket.  Chief Judge Amico was assigned a post-conviction death penalty case in 2016, which significantly added to her workload.  Chief Judge Amico’s demeanor is described as compassionate, pleasant, patient and respectful.  She is known as fair and works hard to prepare for her cases.  She has strong organizational and leadership skills.  Relevant stakeholders commented Chief Judge Amico is collaborative on courthouse management issues and committed to ensuring equal access to justice for everyone involved in the judicial process.  She has maintained steadfast leadership of the largest judicial district in the State of Colorado during the COVID-19 pandemic.  Her oral and written rulings are clear and concise. C hief Judge Amico stays current on the law by reviewing opinions issued by the Colorado Court of Appeals and the Colorado Supreme Court on a weekly basis.  Overall, the commission commends Chief Judge Amico for her hard-work.  Based on these findings, the Commission agreed Chief Judge Amico meets performance standards.

The Commission conducted a personal interview with Chief Judge Amico, reviewed opinions she authored, observed her in court, reviewed judicial performance survey responses from attorneys and non-attorneys as well as interviewed members of the District Attorneys, Probation, and Public Defenders departments.  The surveys reflected personal opinions on Chief Judge Amico’s Case Management, Application and Knowledge of the Law, Communications, Diligence, Demeanor and Fairness.  Of the forty-seven (47) completed surveys returned, Chief Judge Amico achieved an overall performance rating of 3.9 out of a possible 4.0. Her ratings for meeting performance standards from attorneys was 95% and 100% from non-attorneys.

Chief Judge Amico was appointed to the District Court bench in 2012 and was appointed Chief Judge in July 2018.  She earned her B.A. from the University of Arizona (1989) and her law degree from the University of Denver Sturm College of Law (1993).  Prior to her appointment, Chief Judge Amico served as a Deputy District Attorney and Chief Deputy District Attorney in Denver.  Chief Judge Amico actively engages in community service.  She volunteers yearly in judging high school mock trial court competitions and is a member of the Arapahoe County Bar Association.  She has been a long-time volunteer of both the Pancreatic Cancer Action Network and the Catholic Charities’ annual drive helping families in need.  Chief Judge Amico is a strong proponent of furthering judicial education and often mentors judicial officers.  She has taught new judges and teaches at Judicial Conference, Advanced New Judge Orientation and statewide training for Probation Officers.